Took yesterday off, been wanting to fly for several weeks but let the office get in the way and then was too tired to go. So yesterday I said enough is enough and headed for the airport. Got the plane out of the hangar and fired up the engine with the newly updated 650 SD in its port. The wind was completely calm, very unusual for Oklahoma. I called ground and was cleared to rwy 21 via foxtrot. This was very handy because the ramp I taxi to from the hangar is adjacent to foxtrot. I acknowledged the clearance and taxied the 100 feet or so to the hold line at 21. Tapped the flipflop and called tower ready at 21.

I was cleared instantly for take off and entered the runway with a non-stop turn and throttled up. The thumping of rolling down the pavement quickly gave way to the smoothness of being airborne. I was climbing at 87 kts. and a little better than 800 fpm, the O-360 was running smoothly and strong like a racehorse which had been pent up too long. I was not completely in my own bubble, however, I knew there were two behind me including a KA 200 on an instrument flight plan. I heard him ask if he had to wait for the Warrior or could he take Charlie 1 for an intersection takeoff. He was ready and in a hurry. He was approved for the intersection and would depart before the Warrior (OU student pilot). I had announced a south departure and now being more than 5 miles form the airport and climbing through 3500 started to decide where I wanted to go.

I changed to Oke City approach frequency and turned west. The KA was barreling up behind me and they were talking about little old me. We were at the same altitude (my ADS-B was working and ATC had me exactly correct) but I would be below him by the time he reached my location, I did get an RA on the 650 so he got pretty close. The frequency was abnormally busy and the controller was an honor graduate of the school of machinegun instructions and he never took a breath. I thought for a moment I was in either NY or the LA basin. Finally, I got the call in edgewise and picked up a squawk for my flight in the area. I flew in absolutely smooth as glass air. I was at 4000 msl not quite 3000 agl. I explained my just out flying status and was approved own navigation. I went up the west side of Will Rogers Airport and then cut across the north end of their approach to 17 and headed toward downtown OKC. Once there I made a leisurely turn back toward Westheimer. It dawned on me that I was at the beginning of the ILS for 18 at KOUN. So, I set up for an unofficial ILS and flew that to the runway.

As I passed the final approach fix, the tower called and advised that I had a 30 kt. overtake on the preceding Warrior, so I advised I would pull it back. I kept the needles crossed through the entire approach which pleased me greatly. I reduced speed further and picked up the landing Warrior ahead. I heard and saw him directed to exit the runway at Charlie 1, so I proceeded to land and roll out. 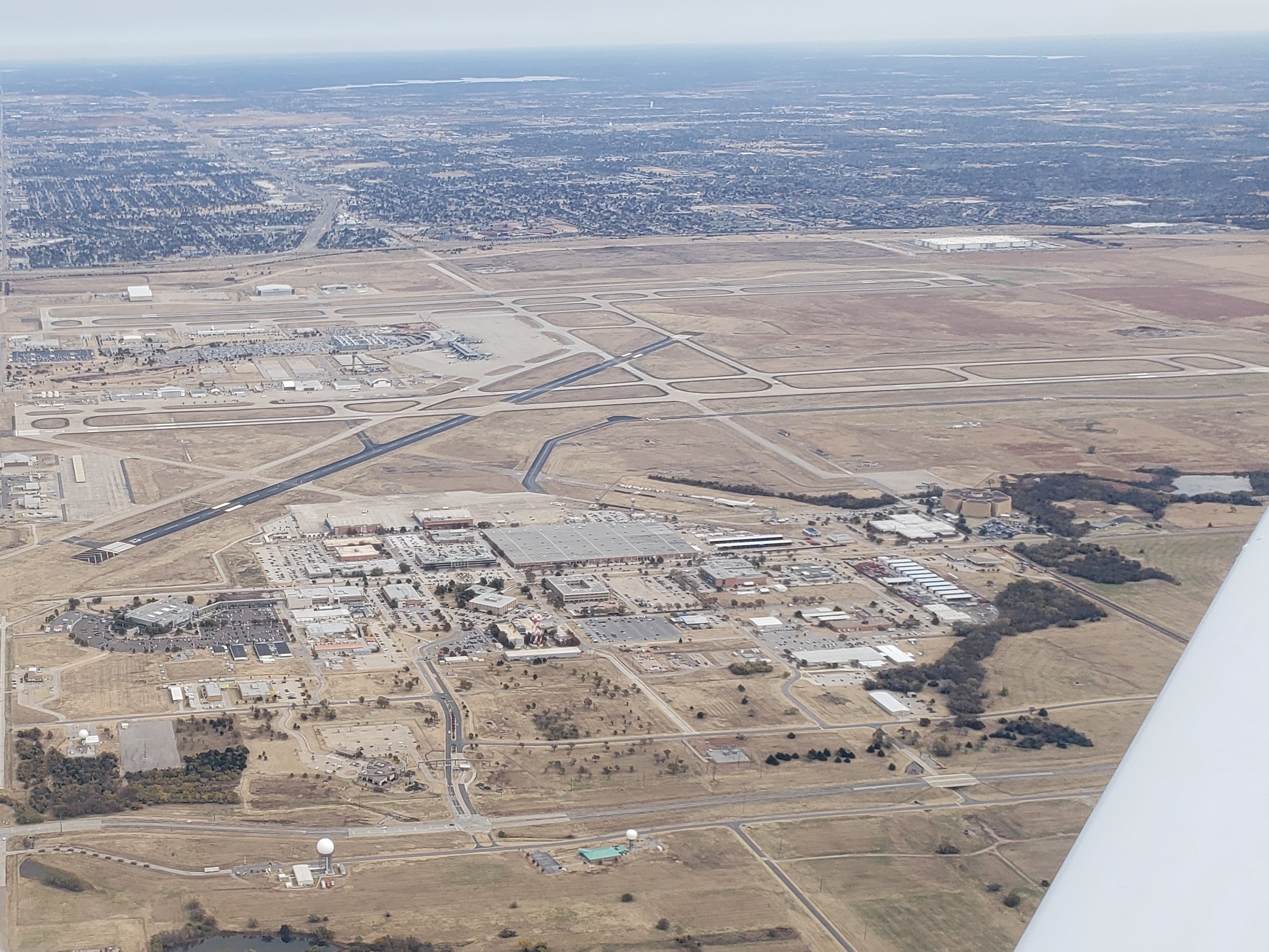 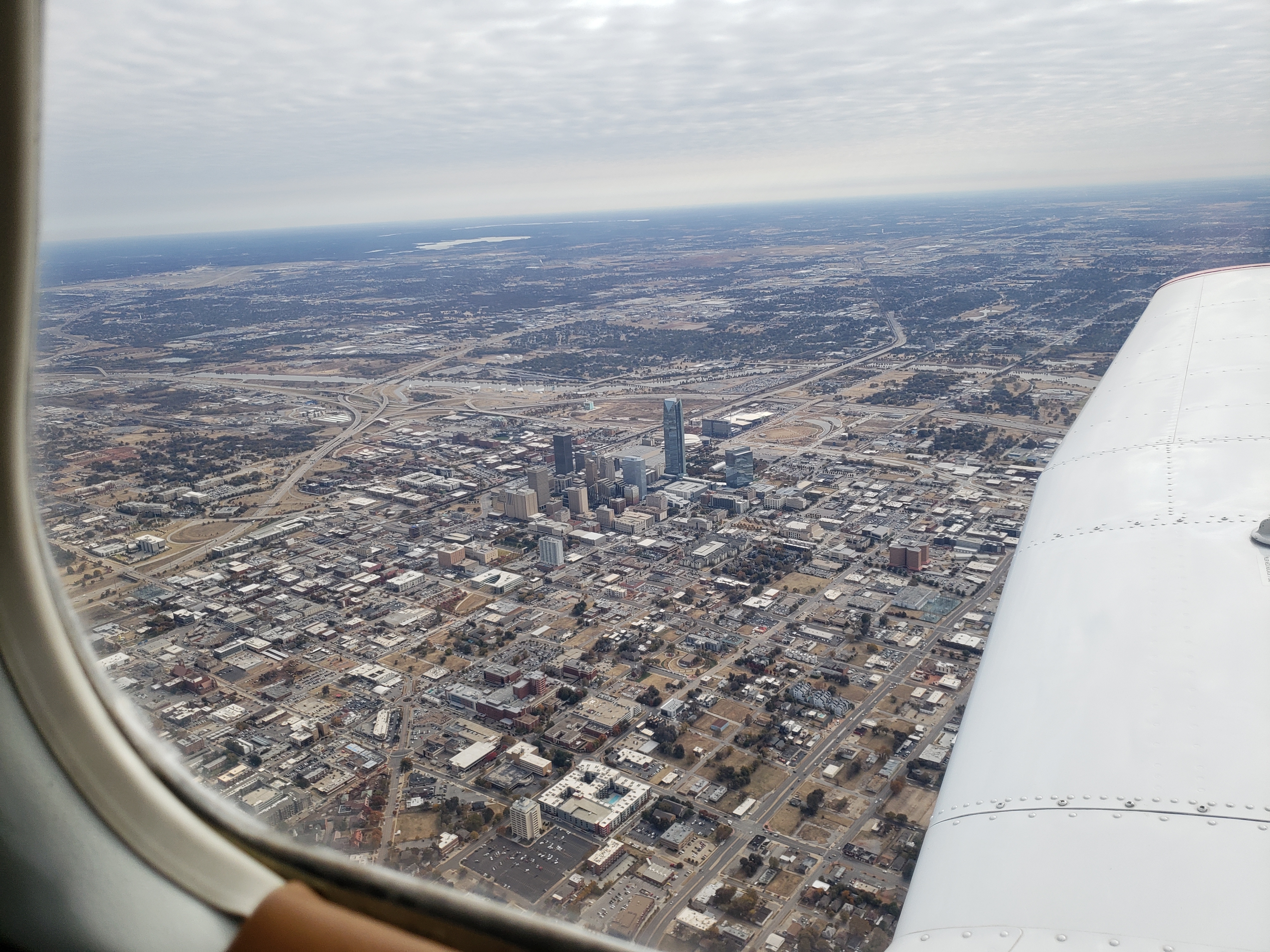