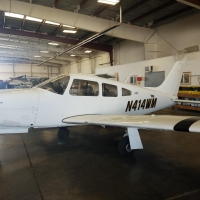 Recently had a full electrical failure, fortunately it was Day VFR. The airplane was on downwind, and after putting the gear down, lost the radios and all electronics. Dark panel. On final received a RED light from the tower. Performed a go around and received a Green light from the Light gun and landed. After shut down tried to restart the engine. Dead battery. This is a 2004 Arrow III, PA-28R-201.
The A&P arrived 2 days later to look at the problem. As per his instructions I had the battery on a charger for several hours prior to his arrival. He tested everything and could not find anything wrong in the electrical system. Even the battery was good and not in need of replacement. His assessment is that the alternator had tripped off in flight for some reason and was not noticed or reset as per the electrical failure checklist. Excuses include; Bright CAVU weather in the Arizona sunshine while practicing VFR Commercial Pilot maneuvers, eyes up and outside the cockpit.
Another interesting component in the chain, is that the mechanic discovered that the "Alternator Out Lamp" on the annunciation panel, does not illuminate very brightly when the alternator is turned off with the engine running. However it does display as brightly as the Oil & Vacuum lamps when it it tested with the Annuniciator test button.
Is this something that can be fixed or is this normal for this lamp to display less brightly when activated by an alternator failure or disabled by the alternator On/Off switch? Is there a part that needs to be replaced in the electrical wiring system and if so what is the part name and number.

Sincerely yours, for a safer G.A.
Bristowe Pitts