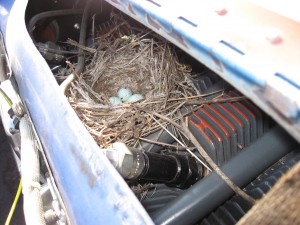 Everyone is busy these days and almost all of us are guilty of neglecting our airplanes from time to time. However, when the opportunity to get “back in the saddle” after a few months of inactivity eventually arrives that first flight can sometimes be a challenge. Everything from bird’s nests to dead batteries to flat tires awaits the pilot of a plane that hasn’t been flown in a long time.

If you’re looking to get your grounded bird back in circulation, it’s important to know the typical problems associated with an aircraft that has been left unused. Whether the result of time or a byproduct of the environment in which they are kept, here are some key airplane components that are more susceptible to problems and what you can do to ensure your plane is in shape for its long overdue next flight.

Provided the battery has enough of a charge, the starter can be engaged and used to spin the engine a few revolutions to thoroughly pre-oil the internal parts of the engine. This should be kept to only a few seconds so the starter doesn’t get too hot. Once the oil pressure registers even slightly on the gage, the engine should have at least some oil on all the internal parts. The plugs can then be re-installed.

Mud daubers love to build nests in fuel vents on airplanes that have been idle. These mud nests will completely clog fuel vents and not allow proper flow of the fuel system. To make sure a fuel vent is open, remove the cap of the affected tank and lightly blow into the vent. If the vent is open, the air will bubble up and out of the tank.

As mentioned above, wasps love to build their homes in airplanes. Inspect the fresh air vents for nests. You don’t want the bees forced inside the cabin when the vent is opened in flight! Similarly, be sure to check all openings for evidence of bird activity. Smoldering bird’s nests stuck between cylinder fins have contributed to many engine fires.