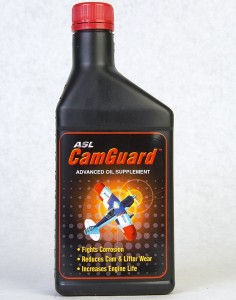 Oil is the lifeblood of our engines—it lubricates, it cools, it protects—and without it, our engines wouldn’t run at all. Without additives in that oil, we would be performing considerably more maintenance and have significantly shorter TBOs. Together, they work out of sight and out of mind, and we should appreciate them for all they do.

If you haven’t heard of CamGuard, then you don’t read enough magazines or go to enough airshows. CamGuard has been around for about 15 years now and has become one of the most popular oil additives since the Wright brothers first lifted off. There have been other additives, mostly elixirs of dubious background, that have disappointed a lot of pilots, but CamGuard has, at this point, achieved nothing but acceptance throughout aviation.

CamGuard is added to your crankcase whenever you change or add oil. It was developed by Ed Kollin, a brilliant formulation chemist with decades of experience in the world of high-performance lubricants. Kollin met Greg Merrell, of Aircraft Specialties Services, Inc. (ASSI), in Tulsa, OK, and they partnered up on the development of an additive that would protect aircraft engines from the four would-be destructive forces affecting these air-cooled power plants: Corrosion, Wear, Sludge and Leaky Seals. These four items affect all engine components in every location in the engine, from the crankshaft and bearings to the cylinders and valves. They also combine to reduce TBO and increase unscheduled maintenance, wasting owners’ money.

That I’m a CamGuard fan should be obvious by now. I’ve used it in my airplanes and my automobiles and seen nothing but positive results. In writing about CamGuard, I’ve been exposed to users from all areas of aviation, from hobby pilots to airshow performers, air race guys to overhaul shops. I have, in six years of knowing about CamGuard, heard just two negative reports. One was a pilot who didn’t like the smell and the second was a shop owner who thought that it could potentially make Continental starter adapters slip. (We’ll talk about this later).

CamGuard was developed by Kollin to be the ultimate additive package that, frankly, should be used in every aircraft oil. Of the oils out there, some have minimal additives that attempt to address one or two of the four problems mentioned, but none of them has the full battery of protection of CamGuard—and it’s not even close. One major oil company goes so far as to say, “CamGuard is already in our oil, so you don’t need to add it!” That bold claim is simply not true. Any oil possessing all these properties would be more expensive. CamGuard itself is expensive, but eliminating just one round of unscheduled maintenance (like replacing a cylinder) over the life of an engine more than covers the cost—not to mention the peace of mind it provides.

Blow-by is the problem

Blow-by is responsible for the vast majority of the problems we see in our aircraft engines. Blow-by is the gas that bypasses the less-than-perfect piston ring seal as the combustion pressures approach 1000psi. Blow-by consists of raw avgas, partially burned (and reactive) avgas, water, carbon dioxide, heat, and tiny lead particles (as lead bromide). The blow-by fuel reacts to create deposit-forming resins and organic acids. The resins lead to deposits and sludge, and the acids combine with water to create a version of battery acid.

A lot of water is produced by the engine as it runs. Approximately one gallon of water, as vapor, is produced for every gallon of fuel that is burned during the combustion process. Most of this water simply exits the engine through the exhaust pipe. However, some of it joins the blow-by fuel in shooting past the piston rings and entering the oil.

CamGuard provides anti-corrosion protection with molecules that form an impermeable film on the surface of metals. This temporary film is reformed each time the hot engine is shutdown. This inhibiting film repels water and acidic molecules, thus stopping corrosion before it starts. Check out the short video describing corrosion inhibitors on the CamGuard website: www.aslcamguard.com/videos/technical-videos.

If you ever take off a cylinder and look at the piston, you’ll see black carbon crud that has formed on the surface of the piston and in the ring grooves. Further down the piston, where temperatures are cooler, you’ll also notice grey sludge in the oil control ring groove. The formation of a sticky (varnish) resin is the product of blow-by fuel contamination and heat.

The blow-by fuel reacts to form all the varnish and carbon deposits you see on the hottest parts of the engine. Reactive fuel resin sticking to hot surfaces and cross linking (polymerizing) to form carbon deposits is potentially a big problem. Deposits cause piston rings and valves to stick leading to costly repairs or worse.

In cooler areas, we notice the addition of the lead bromide (lead) particles to make up sludge. Sludge is that gooey, gray material you find in hollows and eddy spaces in an engine where oil flow is slow and temperatures are lower. Sludge consists of a small amount of varnish resin loosely holding a lot of lead particles. Sludge cannot be filtered off and, because it is heavy, it collects in out-of-the-way places.

CamGuard stops the crosslinking of the varnish resin. This effectively shuts down both deposit and sludge formation. It would be like varnish that you painted on a surface never dried.

The anti-wear chemistry in CamGuard forms sacrificial anti-wear films just like ZDDP (zinc) does in automotive oils. As oil washes over the metal surfaces of the lifters and cam, the pressure of the cam lobe on the lifter face (upwards of 110,000psi) creates frictional heat. This heat causes the anti-wear molecules to decompose and create a thin plastic-like film on each of the rubbing surfaces. This thin film stops the frictional heating. The film begins wearing away (sacrificially) until the metal-to-metal frictional heating returns and the whole process starts again. Check out the short video describing wear protection on the CamGuard website: www.aslcamguard.com/videos/technical-videos

One great annoyance of airplane ownership is weeping seals. The prop seal, accessory case, and push rod tubes are the most noticeable. CamGuard has components that condition the entire seal and keep/return it to new condition. It won’t stop a leak on a damaged seal, but in an average engine, an owner will find fewer drips and a much cleaner engine compartment.

With the success of CamGuard Aviation, Kollin began to look to expand his product line. He worked with his many contacts in the additive industry and, within a year, was able to formulate several new products. He has the great advantage of being able to offer the latest technologies, which may be five or more years ahead of the oil companies. He ended up with products that greatly enhance the anti-wear, frictional, deposit, corrosion, and seal-conditioning properties of Automotive, Diesel and Marine oils. These products are significantly different from each other and specifically designed for use with the particular type of oil used.

When wear takes place in the adapter, it becomes susceptible to slippage and sensitive to the frictional characteristics of the oil. This is why CamGuard does not contain friction modifiers. The main cause of wear in the two older style adapters turned out to be the inability of the adapter spring(s) to release because of starter motor resistance. If the motor does not turn backwards a small amount after engine start and release of the spring mechanism, wear will take place in the adapter. Before putting the starter on the adapter, perform this simple test: Grab the shaft of the starter with your thumb and finger. If you can turn it both ways, you’re good to go.

The CamGuard guys are a talented and curious bunch and have undertaken an effort to characterize the three adapter styles in various stages of wear with every oil and additive available. Initial results indicate that CamGuard may improve a worn starter adapter’s performance. More to come on this later!

CamGuard is now well ensconced in aviation. It is estimated that well over three million running hours have been accumulated by aircraft using CamGuard, and it has proven itself to the most discerning pilots. Continental Motors Inc. took notice and their Service Center in Fairhope, Alabama, has been a CamGuard dealer for several years. Late last year, Continental Motors Services Inc. entered into a two-year study with ASL, offering customers of repaired, overhauled, remanufactured, and new engines the opportunity to participate in a formal study of CamGuard. ASL provides free product and subsidized oil analysis; customers get enhanced maintenance and inspections of their engines at no extra charge; and Continental develops their own engineering database of CamGuard use with a look at a variety of maintenance benefits.

If, after reading this, you think it was a long hard sell for CamGuard, you aren’t much off of the mark. We writers try to be positive about everything we write about. We love rebuilt Cessna 195s and relish a good story about a Piper Cub or a Geronimo. We also support guys who work on their airplanes and make them better, safer, and more attractive. It’s no wonder that we (or I) can be this enthusiastic about a product that has proven itself. Bill Harrelson, the world record setting Lancair pilot, swears by CamGuard. Reno racers (like back-to-back National Champion, Dennis Buehn) and International Council of Air Show (ICAS) pilots understand that it just makes for longer lasting and more reliable engines. That should tell us something. 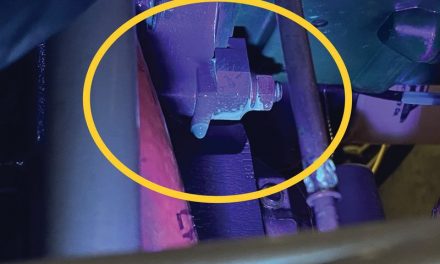