Any pilot who’s been kicking around aviation for a while recognizes the names of airplanes identified as industry icons. Back in the 1930s, the Beech Staggerwing became a standard by which other models were measured. The Boeing Stearman was another airplane indelibly imprinted on the minds of thousands of aspiring military pilots. In the 1940s and 1950s, the model 35 Bonanza also assumed a place as one of the paragons of performance, though the type’s hundreds of tail failures later proved the V-tail model was not without its warts. (In fairness, many of these structural failures were probably precipitated by the airplanes’ pilots. Trouble was that many others were not.)

Then, there was the Cherokee 180. (“Give me a break, Bill. You’re not seriously suggesting there was anything special about the pedestrian Cherokee 180, are you?” Why, yes, in fact, I am.) The first of the true, four-seat Cherokees may not have been as legendary as the Staggerwing or Stearman, but it was indeed a special airplane in that it was Piper’s first four-seater truly capable of lifting four people. Yes, there had been the Piper Pacer and Clipper, marginal, low-powered, four-place machines of the ‘40s and ‘50s, and the modestly more capable 160 hp Tri-Pacer of the same period, but these were correctly considered “marginal performers” with a full load.

(Significant of not much, I logged my first few hours of flight time in an 85 hp “Super” Cub, and spent the rest of my private training in a Colt, a two-seat, 108 hp, economy version of the Tri-Pacer. A fun little airplane, but its stubby wings didn’t provide much glide with power off.)

Then too, the less powerful Cherokees that preceded the Cherokee 180 (the 140, 150, and 160), weren’t quite up to the job of lifting a quad of people. Performance with a full string quartet aboard was marginal—even without their instruments! In fact, Piper’s first semi-modern, fixed-gear, single-engine, people-mover of a quartet of humans was the Piper Cherokee 180. The collective brain child of John Thorp (of T-18 fame) and Fred Weick, an NACA airfoil designer and engineer, the PA-28 incorporated a purely rectangular wing with a constant chord and a conventional “Hershey bar” configuration, featuring a dramatically curved surface on top and a comparatively flat bottom wing.

Technically, it was known as an NACA 65(2)-415. The 415 referred to Fred Weick’s Ercoupe design of 20 years before which used a similar airfoil. From the outset, the primary goal of the Cherokee design was to produce an aircraft that could actually make a profit. The Cherokee series was configured with significant efficiencies of production that would allow Piper to build a safe, economical, aircraft at a low cost to allow sales at a reduced price.

Inevitably, the basic Piper 180 was improved as it matured. Later versions of the Cherokee 180 utilized the longer-span, semi-tapered Warrior wing, an obvious aesthetic success, but perhaps a less desirable aerodynamic section. Designer John Thorp commented about the later, tapered wing, “Tapered wings tend to stall outboard, reducing aileron effectiveness and increasing the likelihood of a roll off into a spin.” Noted aircraft designer Peter Garrison agreed that tapered wings were of limited value. “To prevent tip stall (with the semi-tapered airfoil), designers resorted to providing the outer portion of tapered wings with more cambered airfoil sections, drooped or enlarged leading edges, fixed or automatic slots or slats, and, most commonly, wing twist or washout. The trouble with these fixes is that they all increase drag, (often) canceling whatever benefits the tapered wing was supposed to deliver in the first place.”

The simple, original, rectangular design was intended to offer an extremely docile stall, and that was exactly the result. When Weick and Thorp were done with the PA-28 wing, its stall characteristics were little more than a gentle, hobby horse bucking up and down, with almost no tendency to drop a wing. Hold a Cherokee in a coordinated stall, and the airplane would usually mush toward the ground at 800-900 fpm in a roughly level attitude. Some instructors even criticized all generic Cherokees as being too easy to fly! Another benefit of the original wing design may have been slightly reduced drag. This resulted in perhaps a knot more real-world cruise than the later Warrior wing. Piper billed the followon, 180 hp Archer with the new wing as having “slightly quicker control response,” but again, few pilots could tell the difference. It looked sexier, and that’s what counted.

With 180 hp out front, Cherokee 180s were among the first Pipers to present real competition to the Cessna Skyhawk which had outsold everyone from the day of its introduction. The Cherokee 180 offered an answer to those pilots who preferred a low wing design rather than a high wing aircraft. (Yes, I know, there aren’t many low wing birds, are there? On the other hand, how many fighters fly beneath high wings?)

The Cherokee 180 was targeted at the man with a small family or the pilot who needed on-demand business or pleasure travel over short distances. Performance was adequate for operation anywhere in America (perhaps excluding the high Rockies or Sierra Nevada). Best of all, for pilots who purchased a Cherokee 180 to haul their family, the PA-28-180 featured one of the most reliable general aviation engines of all time, the Lycoming O-360-A1A. With a TBO of 2,000 hours, that doesn’t even begin to tell the story of its trustworthiness. These days, practically every dedicated general aviation engine offers the same 2,000 hr TBO. However, over the last 50 years, the Lycoming O-360 (and its injected cousin, the IO-360) has become something of a legend of endurance and trouble-free operation. It’s about as simple as an engine can be—a standard, wet-sump, horizontally-opposed, four cylinder mill fed by a carburetor—and owner/operators swear by it.

The Cherokee 180’s service ceiling was alleged to be 16,400 feet; though it’s unlikely anyone ever elected to check that number. A more typical cruise height was 7,500 feet, and you could usually see that altitude 15 minutes after departure from sea level. Climb was an initial 750 fpm, not bad for a 2,400 pound airplane with only 160 square feet of wing and 180 hp for encouragement. (In contrast, the comparable 172’s ascent was 645 fpm from sea level.) Even at 7,500 feet, the 180’s climb was usually 400 fpm or better. That is, unless it was summer and the airplane was tired.

Even the Cherokee 180 was weak when the density altitude was a little high and the pilot was a little dumb. One summer, while flying out of Big Bear, California (elevation 6,750 ft MSL) in a poor, defenseless, rental Cherokee 180, I learned (the hard way) that performance charts are only for ideal situations.

With four folks to lift (fortunately two of them lightweight women), I calculated our takeoff run and rate of climb and concluded the departure “should be” no problem. The airplane obviously had never read the book! The typical departure out of Big Bear Lake features an initial leg over the lake itself. We survived, or I wouldn’t be writing this, but my rear seat passengers thought it was hilarious when I buzzed sailboats at 50 feet or less. Everyone was waving and having a good time – except me. I was struggling for every foot of altitude I could get. Fortunately, there was a dam at the west end of the lake. I cleared the power lines on top of the dam, and it was all downhill from there.

Excluding such stupid pilot tricks, the Cherokee 180 was an uncommonly safe and reliable four-seater. Gross weight was set at 2,400 pounds, and the Cherokee 180’s basic empty weight was only 1,230 pounds. With a full 50 gallons of fuel aboard, the airplane offered an impressive 870 pounds of payload. Even with an additional 100 pounds of avionics and other options, the 180 still offered a fourfolks-plus-baggage allowance. The baggage compartment behind the rear seats was limited to 125 pounds, but if Cherokee pilots needed to lift more, they could always opt for the PA-32 Cherokee Six.

An additional advantage was that the center of gravity envelope was wide and accommodating. You could load pretty much anything or anyone in any seat without concern for driving the balance point out the back of the envelope. That’s not to suggest the airplane paid no attention to the location of weight, but it did far better than you might expect.

Cruise performance in either airplane was nothing to write home about, but again, the Cherokee outpaced the Skyhawk, scoring 124 knots to the Cessna’s 114 knots. True, that’s a little unfair, since the Piper sported 180 hp and the Cessna had only 145, but those were the numbers in the early ‘60s. The more realistic comparison might be between the Cherokee 150 and the Skyhawk, but the 150 wasn’t really a four-seat machine. Landing characteristics were in perfect keeping with the airplane’s benign stall manners. The manual flaps allowed you to lever in 15, 25 or 35 degrees of under wing spoilers as fast as you could think about it. Approaches worked well down to any speed above 60 knots, and judging flare height was almost silly simple.

Piper’s oleo struts made even amateurs look good. However many folks you carried in a Cherokee 180, the model represented the precursor of things to come. 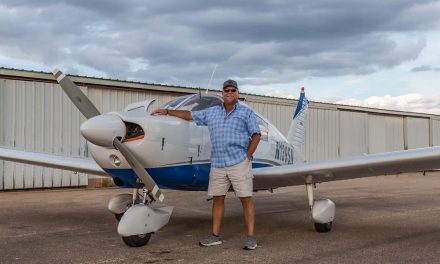 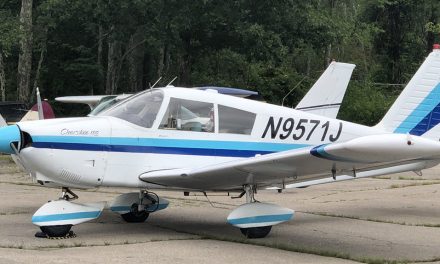 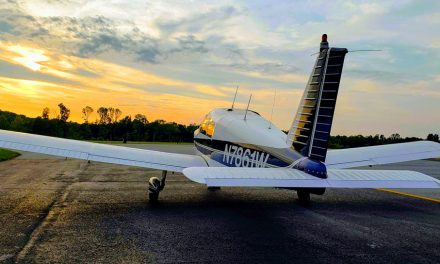 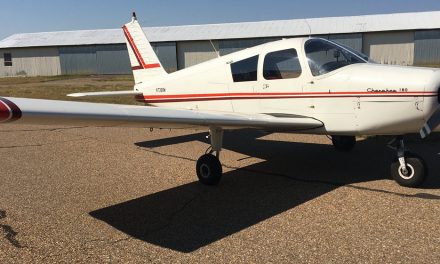