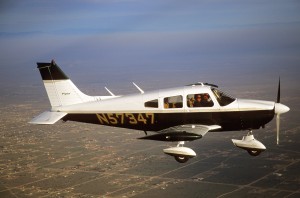 Piper’s answer to the Skylane was well worth the investment

Let’s say you manufacture a line of general aviation airplanes that’s fairly competitive with most anything on the market. You’ve been building your aircraft for 20 years, and many people consider your oldest model to be THE icon of personal aviation.

Your primary competitor is a company that builds very different but similarly safe and reliable airplanes, has an equal grip on the market, and even produces one airplane that you have no counter for. What do you do?

If you’re Piper Aircraft, you put the crosshairs on the Cessna Skylane and design a target-specific model intended to compete head-to-head with the popular Cessna. In this case, Piper didn’t have to look far, as the popular PA-28-150/160 had been introduced in 1962 and was readily adaptable to the mission. Piper had little to do other than transplant a 235-hp engine onto the nose of the already popular Cherokee and see what happened.

That’s exactly what Piper did in 1964 when they introduced the airplane that was to evolve into the Piper Dakota. Technically, that first airplane was called the Cherokee 235 (duh!), but it was to be improved and modified to become the PA-28-236, strongest and most capable of the four-seat Cherokee single family.

Though the Cherokee 235 premiered a full eight years after the introduction of the Skylane, the new Piper model nevertheless had an impact on Skylane sales. Performance numbers were similar in most respects, but perhaps the mere high wing/low wing preference swayed some buyers toward the Piper product. Whatever the motivation, Piper built as many as 200 Cherokee 235s a year during the halcyon days of the mid-‘70s.

Technically, the Dakota was the fourth iteration of the 235-hp Cherokee. It was an airplane in search of a name. Just as the 140 became the Warrior and the 180 became the Archer, the original airplane needed something more than a numerical designation, as well. That initial design was built from 1964 thru 1972, then the fuselage was stretched five inches, the tail was enlarged slightly, and gross was increased by 100 pounds to hatch the 1973 Piper Charger.

The Charger was a good airplane, but the model name was hardly in keeping with Piper’s penchant for American Indian monikers. A year later, Piper made the constant speed prop standard and renamed the resulting airplane the Pathfinder. (You remember the famous Pathfinder Indians, don’t you?)

That version lasted thru 1977, during which time Skylane sales continued to trounce the 235-hp Cherokee. Piper dropped the model altogether in 1978 to rethink their philosophy on the top, fixed-gear, four-seat Cherokee. In 1979, the company reintroduced the airplane as a two-plane family, both called Dakotas. There was the Turbo Dakota, essentially a fixed-gear Turbo-Arrow, incorporating the semi-tapered Warrior wing and the turbocharged, 200-hp Continental engine. The second was the evolutionary, 235-hp Cherokee updated to the new wing.

Within a year, the market signaled its indifference to the Turbo Dakota by generating only 91 sales, and the Vero Beach-based company dropped that airplane but retained the original, carbureted, 235-hp powerplant. From 1979 thru the close of production in 1994, the Dakota maintained roughly the same configuration, featuring essentially the same weight and performance, with variations primarily in avionics, paint, and interior.

At an eventual 3000 pounds gross, the Dakota was that rare machine—a four-seater that could carry four folks, and then some. Standard empty weight varied over the years, but an examination of the 1980/1981 Jane’s All-The-World’s Aircraft provides an interesting comparison between the Dakota and Skylane.

Sorry for the enumeration, but it’s inevitable. Jane’s lists a typical empty weight at 1608 pounds for the Dakota. Add the airplane’s 72 gallons of fuel (432 pounds), and you’re up to 2040 pounds. This meant the Dakota had a theoretical payload of 960 pounds.

We did say theoretical. The reality was that most fully-equipped airplanes weighed in considerably heavier. (The 70-pound Piper Aire air-conditioning was a popular option.) Add 150 pounds of miscellaneous extras and associated stuff to empty, and you’d be at 1758 pounds empty. This still left a surprising 810 pounds of payload, more than enough for four, full-size folks and baggage.

In contrast, the Cessna 182Q of the same vintage sported a 1775 pound empty against a 3100 pound gross. Add the same 150 pounds to empty, and you wind up with an 1175 pound useful load. Subtract the 88 gallon fuel load, and payload works out to 647 pounds, not quite four folks worth. This meant the Dakota was most emphatically the heavy lifter of the two. (In fairness, the Skylane does carry 16 gallons more fuel than the Dakota, but even if you factor that out, the Piper comes out well ahead.)

Still, the reality is that the Skylane remains in production, and the Dakota has been shelved for 15 years. Why?

One reason is that Cessna has probably been more successful at fostering its image as a superlative producer of trainers. Despite the considerable success of the entry level Cherokees, the Cessna 152 and 172 have been the most successful trainers in the world, and that has probably fostered exactly what Cessna hoped it would, a step-up market for bigger, faster, and more complex airplanes. It’s a fact that pilots often are inclined to buy the brand (or at least the general configuration) of airplane they train in. A pilot educated in a high wing is more likely to buy a high wing, and a student licensed in a low wing…

For its part, the Dakota had a lot to offer the new pilot, and it also found favor with more established aviators looking for better performance than their original mount. Back in the ‘80s, I delivered a new Dakota from Vero Beach to Geneva, Switzerland, and the buyer, Hans Berger, was stepping up from an Archer. Berger owned a jewelry and watch store in downtown Geneva and traveled around Europe on a regular basis for both business and pleasure.

Berger’s motivation for the upgrade was simple – payload and high altitude performance. “For me, the Dakota was a totally logical next step,” said Berger. “The Archer was a wonderful first airplane, but it was a little limited here in Switzerland because of the Alps. We have tall mountains all around Lake Geneva, and an airplane with good high altitude capability is essential for consistent IFR operation.

“When I purchased the Archer after earning my PPL license, I didn’t have much need for high altitude as long as I stayed VFR,” Berger continued. “You can fly north into Germany or west to France VFR without the need of high level operation, but if you’re planning to travel for business on a regular basis in IFR conditions, you really need more altitude performance.”

Berger also explained that he sometimes carried his wife and two teenagers on trips, and the Dakota’s huge payload and wide CG range would allow him to fly with pretty much whatever he wished, whereas the Archer was more limited. “Since earning my instrument rating, I’ve made several flights in the Archer that worked out fine, but the climbs to altitude were long and laborious, and there was little margin remaining. That won’t be the case in the Dakota.”

Whatever the load or mission, the Dakota is a comfortable place to travel. The cabin is 42 inches wide by 49 inches tall, not the widest, but plenty adequate for most folks of normal girth. The back seat is reasonable, and it’s not hard to imagine sitting still in a Dakota for several hours.

Another benefit of the Dakota is that it covers ground quicker, though at a slightly higher cost, than the Archer. Not surprisingly, cruise performance is similar to that of the Skylane. The 235-hp Cherokee manages an easy 140 knots, it says here, compared to more like 120 knots in the Archer.

While 20 knots more speed may not seem that big an advantage, the difference in climb can be significant. Specifically, the Dakota scores 1110 fpm, compared to the Archer’s 735 fpm. (As a point of information, the Skylane scores 865 fpm.) It’s unlikely anyone has ever come to grief because their airplane wasn’t fast enough, but as we all witnessed with the tragic loss of Steve Fawcett in the Sierra Nevada Mountains, a lack of climb performance can present a major problem.

There is a price to be paid for the extra performance, however. The Dakota’s big O-540 Lycoming demands 12-13 gph compared to the Archer’s 9-10 gph. At today’s increasing gas prices, that represents about another $18/hr for fuel here in the US and probably $25/hr in Europe. Operate your airplane a typical 150 hours a year, and that’s as much as $3750/year.

If you’re willing to settle for slightly less speed, however, you can use the Dakota’s 72 gallon tanks to good advantage. Pulled back to 55 percent, you can still see over 125 knots on about nine gph. This translates to 6.5 hours plus reserve for those masochists willing to endure such long legs. That’s 750 nm between pit stops.

Perhaps the best news about the Dakota is that it offers all the benefits of additional power without the disadvantages of adverse handling. The Dakota retains the traditional Cherokee’s benign handling in the pattern. Stall with the manual flaps deployed is a low 56 knots, so approaches as slow as 70 knots are no problem.

Flaps are delightfully positive in application, incidentally, provided you have sufficient right bicep power to deploy them. The Johnson bar lies flat against the floor between the seats in the stowed position and offers three clicks of adjustment, 10, 25 and 40 degrees, resting at a 45 degree angle with flaps full down. With the flaps selected at max, short field performance is good. Like its lesser powered siblings, the Dakota can handle 1000 foot strips without major problems, provided approaches are clear of obstacles.

Landing characteristics couldn’t be much more benign. The airplane retains exactly the right amount of flare at most reasonable approach speeds, and it’s easy to gauge the distance above ground for the final touchdown.

Geneva resident Hans Berger and many other pilots have evaluated the low wing Piper Dakota against the high wing Cessna Skylane, and thousands have chosen the Dakota. Which would you pick?