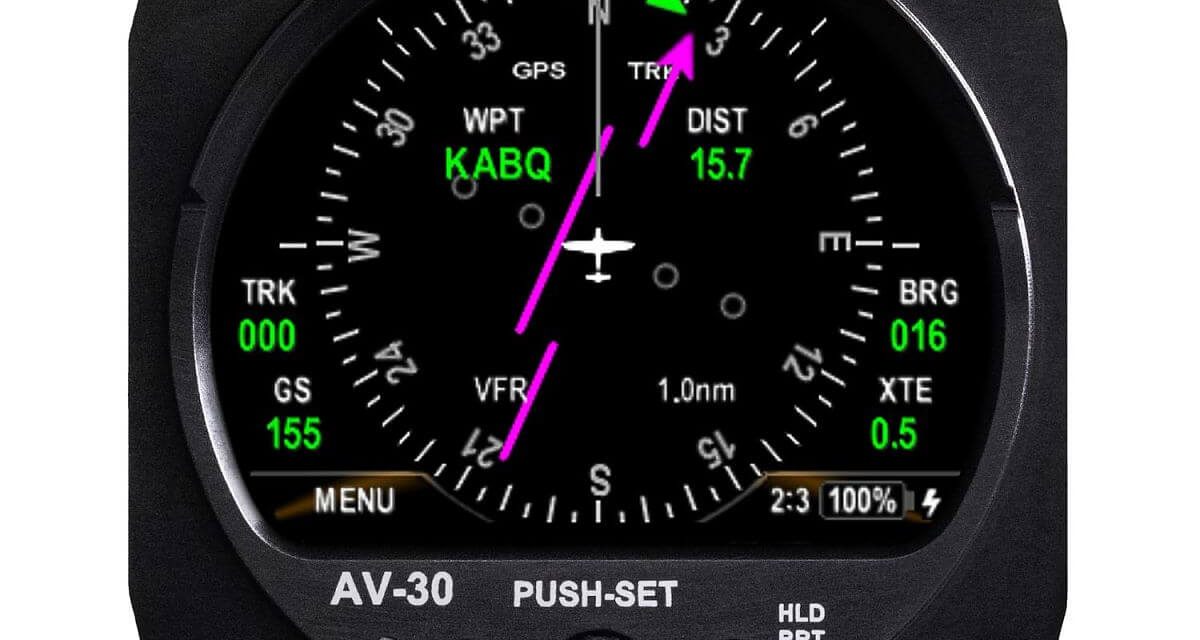 Avionics writer Bob Hart discusses EFIS in this article from a recent issue that turned into basically a uAvionix AV-30-C Review.

Like many of you, I got my start in aviation with RC model aviation.

I was flying model airplanes before I bought my Piper Colt in 1972 (at 22) and during those periods when there was no aircraft in the stable, I filled the void with RC. So, when the drone thing came along, I had to have one. Frankly, I got bored quickly so when the government said I needed to register my drone, I said, “Forget about it!” and I did. Frankly, as a pilot and a model flyer I was concerned about drones and still am. They can do amazing things in the hands of the right person; they can be dangerous in the wrong hands. As GA pilots, we know uAvionix as the company that created the most affordable ADS-B Out solution. The skyBeacon and tailBeacon changed the discussion. Five years ago, pilots expected to spend $5,000 or more to meet the mandate. UAvionix showed them how to do it for half that! I do not have the numbers, but I suspect a significant portion of the legacy aircraft fleet has a uAvionix product on their wingtip or tail. You may have noticed that the first three letters in uAvionix are “UAV” as in unmanned aerial vehicle. That’s because the folks at uAvionix are really into drones and, as a worldwide leader in miniature electronics for drones, have brought that technology to GA — and they appear to be just getting started. You can expect to see more safety enhancing equipment targeted to the general aviation pilot flying a legacy aircraft. In other words — effective and affordable!

As early as 2000, the FAA knew that critical vacuum instruments could be a problem when they, or the vacuum pump, failed in IFR conditions. It was many years before they allowed aircraft owners with factory installed, vacuum driven mechanical gyros to even consider alternatives. That is behind us. The first alternative was to replace the vacuum AI with an electrically driven mechanical model with internal battery backup. These were more reliable. Mid-Continent Instruments called theirs the Lifesaver and it was $4,500 with battery. In the last 3 years, with the FAA’s stamp of approval, came the EFIS alternatives which do more, offer battery backup, and can cost a lot less. We just visited the Garmin GI-275 last month. Let’s talk about the uAvionix solutions: the AV-30-C primary EFIS and the AV-20-S backup EFIS.

First there was the Dynon D10A, the first EFIS AI option for certified GA aircraft, then Garmin’s G5. Garmin just added their GI-275 option and now the uAvionix AV-30-C EFIS. Let us start with price (these are list prices not including install).

Now that we have compared pricing, let’s compare the features of the Dynon D10A and the G5 to the uAvionix AV-30-C starting with what they have in common and then highlight the features and benefits of the AV-30-C. We will leave the GI-275 out of this discussion primarily because of the significant pricing differences. Check the June issue for the complete story on the GI-275.

The AV-30-C, the Dynon D10A, and the G5 AI give you primary attitude, reference indicated airspeed, barometric corrected altitude and vertical speed, and turn rate. The D10A also gives you heading (with builtin magnetometer), voltage, a clock, and G-meter. Both can provide true airspeed and density altitude with an optional OAT probe ($80-$200) and the G5 can provide heading with the optional magnetometer ($275).

• Primary AHARS attitude with magnetic heading
The AV-30-C replaces your existing vacuum AI. It does not replace AIs that drive a legacy autopilot, but this feature is being considered. Reference airspeed, altitude, and vertical speed are also displayed.

• Primary slip
With dual AV-30-Cs installed, you can remove your turn coordinator and that is an excellent location for that engine analyzer you are considering!

• Audio alerts
Hear AOA, g’s, and roll limits (pilot programmable) in your headset or speaker from the AV-30-C AI. (The HSI does not talk)

• Battery backup (included)
2-hour battery backup in the event of power interruption. The AV-30-C also allows customizable faces consistent with the desires of legacy pilots and manual or automatic dimming. Harness is included!

The AV-30-C AI or DG interfaces to most panel-mount and portable GPS units.

In the AI, the GPS provides backup data in the event of an interruption of the aircraft’s pitot-static system. The AI also displays GPS waypoint, distance, and track. This display is pilot programmable and can show as much or as little as you want to see. The GPS HSI provides tracking as a 360 rose or ARC without the need for an additional interface (the G5 requires a GAD 29B). The AV-30-C will not track VOR or ILS navigation at this time although this is a consideration for the future. The units are software driven so updating your AV-30-C AI or DG will be relatively easy as uAvionix introduces additional features. Note that manufacturers are a little conservative during the certification process. Adding new features, especially those that the FAA has never seen before slows down the process. For many light IFR pilots, the GPS interface is enough. Light IFR pilots are doing very little VOR navigating or approaches and even less ILS approaches, especially anything near an approach to minimums. Simply stated, GPS navigation is the primary nav tool for LIFRs and the AV-30-C capability and price are consistent with the needs of a light IFR pilot.

Two interfaces are in development to enhance the AV-30-C: The APA-Mini will interface to legacy autopilots to track heading starting with the S-TECs (estimated cost is $300-$400). However, it is uAvionix’s goal to be able to interface to most “viable” legacy or current autopilots in the future. A more sophisticated autopilot interface is planned for the future that will add features and may be able to replace existing vacuum AIs that serve as position sensors for the most popular legacy autopilots.

I would have to say that uAvionix has done it again. The AV-30-C provides a very capable solution to the rising concerns about vacuum systems in light airplanes and, again, at a price point that even an active VFR pilot can consider.

I would be remiss if I did not also mention the AV-20-S. The AV-20-S is compact and amazing! The AV-20 is not certified as primary to replace your existing horizon. It is designed and certified as a backup instrument that does 75% of what the 3-inch AV-30 does in a 2-inch package. It would be a great backup to a mechanical vacuum AI! The AV-20-S provides 12 functions including AOA, backup attitude, true airspeed, and density altitude (with OAT probe) and a lot more, including a clock/count down timer. The AV-20-S would make a great replacement for your old analog clock and therefore turn that 2-inch hole into something significant especially if you have any interest in the new uAvionix tailBeaconX!

Here is another problem and solution that uAvionix is tackling. The skyBeacon and tailBeacon provide very affordable ADS-B Out solutions for pilots who plan to stay within the confines of the U.S. border. These are UATs (universal access transceivers) that work on 978 MHz and are only legal in the U.S. Pilots in the northern states who see Canada as a destination were likely surprised to see that Canada has decided to go in a different direction than the U.S. with ADS-B.

Canada will require diversity or, in short, a top and bottom antenna and they will require 1090 MHz like the rest of the world. If you look at the photo of the tailBeaconX, you may think it is just a tailBeacon with two antennas, but you would be way off. The tailBeaconX is not a UAT: It is a Mode S/ES transponder on 1090 MHz with diversity and compatible with the Aerion space-based ADS-B satellite system that Canada is adopting. Canada’s ADS-B mandate appears to be a few years away but uAvionix is already on it. Controlling the tailBeaconX or skyBeaconX (in development) will require either an EFIS panel (currently with limited options) or an AV-30-C or AV-20-S for code changes and squawking. Both the AV-30-C or the AV-20-S will be able to control the X. In my opinion, the AV-20-S makes the most sense here. In this configuration, the AV-20-S can meet the IFR requirement for a clock, control your Mode S transponder, and provide backup attitude, AOA, etc. in the event of an issue with your primary AI. UAvionix offers package pricing that includes both the X and the AV-20 or AV-30, and it appears that they plan to offer an upgrade path to pilots who currently own a skyBeacon or tailBeacon. Note that there are already Mode S ADS-B compliant transponders on the market with diversity, but they are significantly higher in price ($6,000 and up) and the tailBeaconX, as you might expect, requires considerably fewer hours to install. Note that the skyBeaconX wingtip version is also in the works.

UAvionix is relatively new to GA but they have already made a significant contribution. Compared to the big guys (Garmin, Avidyne, etc.), uAvionix has a small footprint but they have already taken some pretty big steps toward establishing themselves as a serious player. I suspect this will continue.

Until next time … keep flying with the right “attitude.” 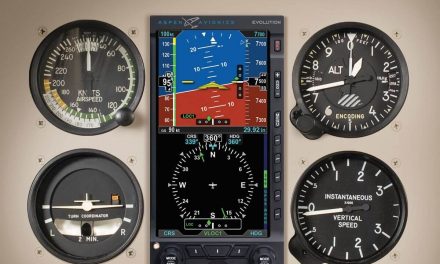 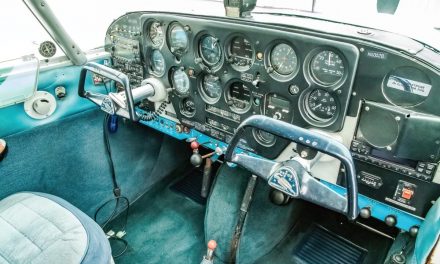