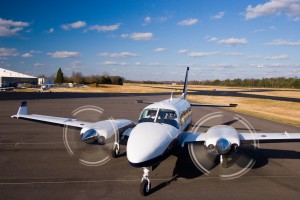 At 7800 pounds, this was the heaviest and most powerful piston Piper ever built.

General Aviation is perhaps best known for its diversity. Here in the United States, there are some 200,000 airplanes on the civil aircraft registry, and that includes a wide variety of types. Some are pure sport machines – gliders, aerobats, and homebuilts – intended primarily for fun and games. Others, such as cropdusters, bushplanes, and cargo haulers, must work hard for their owners. Still others serve dual roles as private transport and business aircraft.

At the top of the pyramid are the pure business machines: sophisticated in systems, expensive to own and operate, and intended strictly for the corporate community. These are the airplanes that transport the movers and shakers of business around the country in pursuit of profit.

If you think I’m referring to Lear jets, Citations, and King Airs, you’re only half right. More than 100,000 of that 200,000 total aircraft fly with piston engines. According to the National Business Aircraft Association, the world’s largest organization of corporate aircraft operators, one of every eight airplanes flying corporate missions today does so behind, between, or in front of piston engines.

Take, for instance, the 1976 Pressurized Navajo owned by Guy Williams of Barrington, Illinois. Williams and his partner run an advertising agency in Chicago, and the ad executive uses his big Piper to visit clients all over the East and Midwest.

While Williams has invested probably $250,000 to cherry out his Navajo, he feels it’s reasonable considering the alternative. New-aircraft prices have risen dramatically in recent years, making older models progressively more attractive. “Today, there are no new corporate piston twins being built,” explains Williams. “Even most new well-equipped, turbocharged singles cost at least $600,000, while turbo six-seaters sell for more like $900,000 to $1,000,000. Of course, none of them offer the comfort, seating capacity, or performance of a Pressurized Navajo.”

Williams acknowledges that P-Navajo operating expenses are much higher than on any single and most piston twins, but says, “You can buy a lot of fuel and maintenance for the $300,000-$500,000 you save over the price of a new single.” His aircraft has to work for a living in order to justify its existence. “Most people probably wouldn’t own a Pressurized Navajo strictly for fun. It’s very expensive to maintain and operate.”

I recently traveled to Chicago to fly Williams’ unusual corporate transport. He bases it at DuPage Airport’s JA Air Center (southwest of Chicago) and believes JA’s support is one key to keeping his airplane in the air. JA does all maintenance and servicing on the Navajo, handling everything from avionics to annual inspections.

Williams chose the P-Navajo specifically because the model is an early piston version of the aircraft that was later developed into the Piper Cheyenne, turboprop. Introduced in 1970, the PA-31P utilized a swept Navajo Chieftain fuselage. The big cabin was 50 inches wide by 50 inches tall, and Piper succeeded in selling almost 300 before the end of production in 1977.

The P-Navajo was the heaviest airplane Piper had at the time, weighing in at a hefty 7800 pounds gross. To lift that much weight, Piper employed two of the largest, most complex, horizontally-opposed aircraft engines ever built: the six-cylinder, turbocharged, geared, Lycoming TIGO-541-E1A models—rated at 425 hp at 45 inches of manifold pressure and 2133 propeller rpm (this equals 3500 engine rpm). This is the highest horsepower rating of any general aviation engine. Technically, the eight-cylinder Continental IO-720 with 720 cubic inches of displacement is larger, but even that has never been called on to deliver as much power as the TIGO-541.

Almost predictably, the Pressurized Navajo’s mills are its Achilles heel. TBO is a comparatively brief 1200 hours, the shortest of any semi-modern engine, and it’s more than coincidence that no other production aircraft manufacturer signed on to use the TIGO-541.

When Williams acquired his airplane a few years back, he flew it for just more than 100 hours before deciding to overhaul both engines. “I was determined to buy the best powerplants I could find. I talked to the factory and learned that the only shop Lycoming knew of authorized to overhaul the TIGO-541 engines (other than its own) was Victor Aviation in Palo Alto, California,” he comments. “I’d heard quite a bit about Victor Sloan’s engines before, and several friends who flew behind them believed the engines to be the smoothest, most powerful, and most reliable available. According to every source I contacted, Victor’s reputation for quality was the best in the industry.”

As a result, JA Air removed and crated both of the P-Navajo’s engines, shipped them to Victor Aviation for full blueprint and balance overhauls plus epoxy resin black coating—the signature of the Black Edition. A short time later, Victor returned the mills to Chicago, JA installed them in N200PN and Williams was back in business.

I flew the Navajo a month later when Williams had about 25 hours on the new powerplants. The Williams P-Navajo is a pristine business machine kept in near-perfect condition, only appropriate since it was formerly owned by noted attorney and aviation enthusiast F. Lee Bailey. It was lavishly equipped with leather interior and a mini-airliner instrument panel, complete with virtually every bell and whistle.

Everything about the Pressurized Navajo involves big numbers. The aircraft can carry up to 242 gallons of fuel and, with 850 hp to feed, it needs every ounce. Full power demands 45 inches of manifold pressure and sucks 90 gph through the engines. Even high cruise exacts 58 gph from the geared Lycomings. Oil capacity is 18 quarts per side, 4.5 gallons of oil in each mill. With a wingspan of nearly 41 feet and a tail that stands more than 13 feet high (both dimensions beyond the province of most tee-hangars), a P-Navajo must normally be housed in either a community hangar or a very large individual one.

This airplane is a heavy investment in both dollars and weight, and that’s evident the moment you try to leave the chocks. At rest on the ramp, the king-size Piper manifests the typical big-aircraft characteristic of an immovable object. It takes a sizeable burst of irresistible force (better known as breakaway thrust) to get all that mass moving, after which powerful brakes are required to stop it. The machine steers like a Peterbilt on the ground, with all the best and worst that implies. Surprisingly, there’s no hydraulic or electrical assist on the nosewheel, so asymmetric thrust definitely helps move it around the tarmac.

If mounting a pair of 425-hp engines on the wings seems an exercise in excess, one result of this power is truly impressive climb performance. Letting 850 hp pull 7800 pounds of airplane through the sky nets a power loading of just more than 9.1 pounds per horsepower, and that means book figure for Vy climb is 1740 fpm, better than any piston twin I can think of except perhaps the 56 Baron. Best rate of climb speed is 110 knots, slow enough that the aircraft elevates its nose well above the horizon, blocking any straight-ahead view of what you’re about to hit.

Most pilots use a 150-knot-cruise climb and settle for a slightly more leisurely 1400 fpm ascent in exchange for a lower deck angle. That still allows you to reach a cruise height in the high teens or low 20s well under the requisite minute per 1000 feet, convenient for flight planning purposes.

The Navajo’s pressurization system was designed for tall flight and, for that reason, Piper inflated the cabin to a stout 5.5 psi (the same differential used a dozen years later on the Malibu). This allows a cabin altitude of 5000 feet at an actual 20,000 feet and a 10,000-foot cabin at 28,000 feet. The system is fairly simple and works just fine in the auto mode, providing a cabin rate of climb equal to about one-third of the airplane’s actual ascent. Yet, if you feel you absolutely must exercise command and control, you can manually run the cabin rate of climb at any setting between 100 and 1000 fpm.

Environmental systems become exponentially more important in any aircraft designed to operate at potentially hostile altitudes, and the P-Navajo’s heater is critical to flight safety above 10,000 feet. Since most of the type are rarely flown at cruise below 15,000 feet, the heater has to work well on practically every flight. Williams favors the flight levels whenever possible, and everything on his Piper works all the time. The heater is a 35,000 BTU Janitrol gas unit that keeps even a large cabin warm and comfortable. When an airplane’s level of sophistication reaches that of the P-Navajo, keeping everything running at the same time can become a problem, but JA Air is apparently up to the challenge.

For those pilots trained to avoid grossly oversquare settings, the Pressurized Navajo’s cruise power combinations are a little startling. How comfortable does 36 inches and 1700 rpm sound? That’s Williams’ favorite setting at about 70 percent power, burning around 50 gph. These are geared, turbocharged engines, however, and you’re looking at prop rpm, not engine rpm. Add half the tach reading to the indicated rpm and you’ll be close to engine rpm. That means 1700 rpm translates to 2550 engine rpm, a much more agreeable number. At 1700 revolutions up at 17,000 to 18,000 feet, those huge, 93-inch-diameter, three-blade props develop tip speeds of nearly Mach 0.7. Driving the blades much faster would cause them to lose efficiency.

The P-Navajo seems to do its best work in the lower 20 flight levels, and Williams usually files for an altitude between 20,000 and 25,000 feet, though he’s had the aircraft as high as 28,000 feet. “I can usually count on a cruise speed of about 220 knots at 23,000 with the Victor engines, which is at least 10 knots quicker than I used to cruise before the overhaul,” he explains. “My typical block speeds for two- or three-hour trips now run consistently over 200 knots, usually 205 to 210. Victor claims the major advantage of the resin coating on the Black Edition engines is better cooling, and I believe it. So far, I haven’t had any heating problems.”

Another plus of the new mills, according to Williams, is the phenomenal smoothness. “I carry many passengers who are used to the low noise level and smooth ride of business jets, and they automatically expect a prop airplane to be loud with plenty of vibration,” he says. “They’re nearly always surprised at how quiet and smooth the P-Navajo is.”

As with many other older cabin-class twins, the total expense of owning a P-Navajo isn’t reflected in the price of admission. Even the very last 1977-model Pressurized Navajos are listed in Aircraft Bluebook at about $155,000 used. A totally unscientific check of Trade-A-Plane revealed a half-dozen of the machines for sale, none more than $100,000. Maintenance cost and operating expenses are the real keys to the bottom-line price. “If you’re going to own an aircraft like this, you have to stay ahead of the potential problems,” Williams suggests. “Preventive maintenance is a must if you hope to minimize downtime.”

High-maintenance or not, Guy Williams is sold on his Pressurized Navajo. There may be better piston twins available for the corporate mission, but don’t ask Williams to name one.