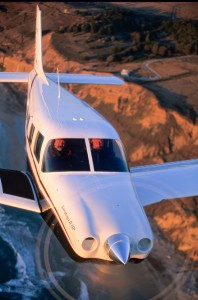 Though Piper’s seemingly ageless PA32 went out of production in 2008, it’s still much beloved by pilots.

Most of the time, the first land you cross inbound from the U.S. mainland to Hawaii is Kohio Point on the island of Molokai. Kohio is better known in the islands as the location of Father Damien’s famous leper colony at Kalaupapa. As I go “feet dry” at 10,000 feet and head for Molokai VOR, inbound to Honolulu from Santa Barbara for the umpteenth time, I can’t help but reflect on how consistent the weather is in this part of the world. Despite the sometimes oppressive heat and humidity, the perennial trade winds help clear the air making it easy to understand why so many people regard Hawaii as the nearest thing to paradise.

From my artificial perch nearly two miles above the sea, I can clearly see the islands of Lanai, Maui, Kahoolawe and, way off to the left, the twin, 14,000-foot dormant volcanoes, Mauna Loa and Mauna Kea, 130 miles away on the big island of Hawaii. As always, approach slam dunks me down to 2000 feet, vectors me past Koko Head, and directs me back out over the ocean south of the airport. In the crystalline air, I can see a stream of airliners inbound to Honolulu International Airport’s twin 12,000-foot runways, 8L and 8R. As the busiest airport in the Pacific, PHNL accommodates a seemingly endless procession of airliners, everything from local commuters to 800,000-pound jumbo jets. Little guys such as I wind up relegated to runway 4R, a mere 9000 feet long.

My mount for this trip is a Piper Saratoga II TC, enroute from Florida to a car dealer in Melbourne, Australia. The first 4000 nm of the trips are behind me—only 5000 more miles to go!

Aviation journalists are supposed to adopt a shield of objectivity when writing about airplanes, but I have to confess to a long-time love affair with the retractable Saratogas. I’ve ferried dozens of them domestically and another dozen across various oceans, logging perhaps 700 hours in the type. In fact, a few years back, I even considered buying a fully-restored 1976 Piper Lance—the direct predecessor to the Saratoga. Fortunately, reason prevailed (unusual for me), and I decided I really didn’t need a roomy, six-seat airplane when I fly almost exclusively with only one or two souls aboard.

While there’s nothing old-fashioned about the modern Saratoga, the basic PA-32 design is, nevertheless, a time-tested survivor, blessed with the latest in 21st century avionics. Its derivative ancestor, the Cherokee Six 260, introduced way back in 1965, evolved to retractable gear on the Lance in 1976, was fitted with Air Research turbocharging in 1978, and adapted to the semi-tapered Warrior wing in 1980 to become the first Saratoga.

Though the last generation Saratogas were upgraded in most areas and are very different machines in almost every respect, the basic airframe/wing/engine configuration is still easily recognizable as a PA-32. Sure, the cowling has gone modern; the prop has added an extra blade with a totally revised semi-scimitar airfoil; the panel is now all-glass; and there’ve been dozens of other upgrades, but deep down, the lineage is pure PA-32R.

Every time I climb aboard a newer Saratoga, it’s like shaking hands with an old friend. I can’t help but marvel at the airplane’s overall comfort, gentle manners and simple reliability. I’m well aware most pilots won’t be flying their Saratogas across the Pacific as I’m doing, but aside from the inevitable numb-butt sensation, it’s not an uncomfortable airplane to sit in for long trips. Inflight handling is heavy but gentle, the stall is a non-event, and the big 300-hp, turbocharged Lycoming TIO-540-AH1A, though not bulletproof, is reliable and easy to manage.

Honolulu approach rouses me from my reverie and reminds me I still have to land. I switch to tower and a few minutes later, I roll the wheels onto runway 4R, 14:18 after takeoff. That works out to an average speed of 151 knots over 2160 nm—not bad for an airplane that lifted off from Santa Barbara at 26 percent over gross flying into consistent headwinds most of the way.

Saratogas of all description have been winning friends and influencing pilots for three decades, and even now that they’re out of production, they continue to be among the most popular of the six-seat heavy lifters. Ever since Cessna elected to shelve the 210 and all other piston products, the market has been limited to only one new six-seat retractable, the Beech G36 Bonanza. Cessna is back in the piston business with three revived fixed-gear models, but sadly for those among us who loved the old 210, the more labor-intensive Centurion is gone forever.

The normally-aspirated and turbocharged Saratogas were discontinued in 2008, leaving only the Beech G36 Bonanza in the six-seat single class. Still, the used Saratogas and the new Bonanza have strong similarities. They share comparable exterior dimensions and nearly identical gross weights, they all use 300-hp engines, and they all feature large, aft cargo doors (though on opposite sides of the fuselage) in addition to the standard, right side, over-wing cabin entry.

There are also are some strong differences, however. Here’s how the three models stack up in performance and specs:

It’s apparent from the comparison above that the Bonanza enjoys the best climb in the class, along with a 10-knot cruise advantage over the normally aspirated HP. The G36 also realizes a better payload. Most of that margin is simply a function of the Pipers’ higher empty weight and slightly reduced gross weight. Conversely, even back in 2008, the Pipers were dramatically less expensive by a factor of about 20 percent.

At least part of the Bonanza’s benefit is artificial, however. The normally-aspirated A/G36 has always been a little short–legged. It carries only 74 gallons of fuel—28 gallons less than the Saratogas. Considering that all three airplanes use 300-hp engines and fuel burn is roughly the same; that translates to shorter range. Reduce the Pipers’ fuel supply to the same 74 gallons, and the payload gap is less impressive, though the Bonanza can still haul nearly two passengers more than the TC and one extra person plus baggage more than the HP.

For the retractable Saratogas, the primary operational benefit is improved endurance. At max cruise settings, the TC can linger aloft for about 4.5 hours plus reserve, the HP for 5.0 hours. In contrast, the Bonanza’s smaller tanks limit the airplane to 3.5 hour legs at high cruise. Despite the G36’s slight speed advantage, the Pipers’ additional fuel capacity allows it 100 to 200 nm more range.

The Piper’s biggest selling point over the old Centurion and the new Bonanza has always been its extremely roomy cabin, roughly as wide as the old Piper Navajo Chieftain twin. Compared to the G36, the Saratogas enjoy a six-inch wider cabin (49 inches across), and this is one instance in which size most definitely matters. Two large men can ride up front without rubbing elbows, and even those passengers in the rear seats will find space generous in virtually all directions. The Saratogas’ cabin is over 10 feet long, and that translates to good leg room in the four, conference-style-facing seats in back.

If there’s a need, however, you can pull all four rear seats in less than a half hour and wind up with a large cargo area, just as in the old Cherokee Six. Years ago, Piper ran an ad in virtually every aviation magazine with a sequence of photos showing several workmen loading a piano into the back of a Cherokee Six 300. That might be a stretch for the modern Saratoga II HP/TC, but it gives you an idea of the size of PA-32’s cabin.

As the top-of-the-line Saratoga, the TC enjoys the benefit of compressed power to the lower flight levels. Top cruise spec is 185 knots at 15,000 feet, and the airplane has a maximum operating altitude of 20,000 feet. That’s not the same as service ceiling, by the way. Max operating altitude is often more a systems limitation than a performance consideration. Service ceiling is defined as the height at which a single-engine airplane’s climb is down to 100 fpm. With the encouragement of an AiResearch turbocharger, the Saratoga TC can still climb 500 fpm at 20,000 feet.

The Piper Saratogas feature handling more reminiscent of light twins than singles, but control feel is consistent with the models’ missions. Roll rate is heavy, and characteristic of all PA-32s, the Saratoga II TC uses an all-flying stabilator for pitch. Once you adjust to the feel, there’s nothing difficult about flying a Saratoga.

Similarly, landings have the feel of a heavier airplane, so it’s important to keep the elevator trim moving all the time. Approaches as slow as 75 knots aren’t out of the question if you need to plunk it on and stop it short, but the airplane is happier at 90 knots.

Standard equipment on both the late-model normally-aspirated and turbocharged Saratogas includes the two-screen Avidyne Integra flat panel display, plus enough other goodies to make either airplane a fly-away IFR machine right out of the box. Most pilots will add another $50,000 worth of extras.

And so the Lance/Saratoga completed three decades as Piper’s premier, unpressurized, single-engine six-seater. Piper and much of the rest of general aviation are thinking diesel these days, but for many pilots who may not be able to spring for $500,000 and up, the Saratoga II TC represents some of the best of the old and the new—more than enough for less than too much.

All specs and performance numbers are drawn from official sources, often the aircraft flight manual or the manufacturer’s web site. Prices are from Aircraft Bluebook Price Digest or the website.