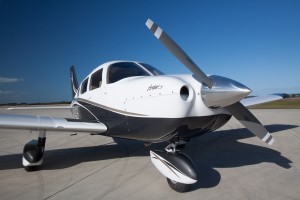 Archer: In the Fourth Generation

Many people regard the Piper Archer as the quintessential Cherokee. While it’s true today’s four-seat, fixed-gear Pipers have long since ceased being plain-Jane Cherokees, the airplanes need make no apologies for their lineage.

Designers Fred Weick and John Thorpe were obsessed with safety and simplicity when they conceived the Cherokee, and Weick’s previous design success, the Ercoupe, was an essentially unstallable, unspinnable machine. In slight contrast, the Cherokee would stall, but only reluctantly, and spins were highly unlikely. Weick and Thorpe concentrated on gentle handling and efficient, production-simple construction. In fact, the original Cherokees were built with 400 fewer parts than the PA22 Tri-Pacer.

Technically, the Cherokees were all straight-wing airplanes, and Piper probably cringes every time some smart-aleck aviation writer calls the newer, semi-tapered designs “Cherokees.” Still, a Cherokee by any other name would still be as friendly, stable, and forgiving.

Call it an Archer and you’ve just named what many pilots consider the best compromise of power, performance, useful load, and economy in the PA28 line, not to mention one of the longest-lived Pipers still in production—now well-past a half-century.

The PA28-181 Archer is built around the carbureted, 180-hp, O-360 Lycoming, certainly one of the industry’s legends for reliability, durability, and economy. The more powerful Dakota may be the better high-performance load lifter and the Warrior a superior economy champ, but the Archer is the in-between machine that sells.

Today’s PA-28-181 Archer can trace its roots to the original Cherokee 180 of 1963, a design that has gradually outlived virtually all its competitors. Beech’s Sport and Sundowner, Cessna’s Cutlass, Hawk XP, and Cardinal, and the Grumman American Tiger are gone, and the only other airplane remaining in the class is the Skyhawk S.

None of this is to suggest that commercial success and superior aeronautical design are synonymous. Look back through the history of aviation, and you’ll find examples of airplanes that were cleverly marketed and sold well – for a while – but weren’t exactly winners in the sky. It’s nevertheless significant that various versions of the PA-28-180 received a strong financial endorsement from the people who really matter—buyers. In the arena that counts the most, the Archer has endured for more than 50 years.

Today’s Archer is very much the airplane it has always been, only different and better. If you’re expecting to hear that there have been significant performance improvements in the last 30 years, forget it. It’s probably true that a design genius such as the late Roy Lopresti could have gleaned a half-dozen knots and some extra climb with an aerodynamic clean-up program, but there’s only so much you can do, given the limitations of fixed-gear, 180 hp, and a fixed-pitch prop.

It’s true there are several other stiff-legged home-builts that will easily outrun the Archer on the same horsepower, but remember that those airplanes aren’t required to jump through the same certification hoops for crashworthiness, pre-stall buffet, spin recovery, etc. If they were, their performance wouldn’t be so stellar.

The Archer’s talents have always been more associated with its Jack-of-all-trades can-do attitude. It’s one of those designs that seems to do everything well, if nothing spectacularly so. Piper learned a long time ago that performance alone isn’t a guarantee of sales and, as a consequence, the Archer has been the beneficiary of a long series of evolutionary changes, many of them related to creature comforts, systems integrity, and operating convenience rather than better climb or cruise, longer range, or more payload.

Park a newer Archer alongside an original 1963 Cherokee 180 and the differences would be dramatic, though both airplanes use essentially the same power and fuselage configuration. Indeed, the development from Cherokee 180 through Challenger to Archer has been a long one, and I won’t try to summarize all the steps along the way.

The most significant aerodynamic change, however, came in 1978 when Piper adapted the Warrior’s high dihedral, semi-tapered, NACA wing, with a five-degree sweepback at mid-span, just outboard of the flaps. The Warrior wing was a significant departure from the original, constant chord, Cherokee wing, in that it incorporated a longer airfoil with bigger, more effective Frise ailerons, 100 inches in span.

The improved wing also utilized a higher aspect ratio from the same area, resulting in slightly less drag. Finally, the angle of incidence decreased three degrees from root to tip, pushing the stall outboard and increasing aileron control when the roots were already stalled.

The airplane has been progressively upgraded since that time, but most of the changes have emphasized comfort rather than performance. In 1995, Piper made a series of improvements that resulted in raising the Roman numeral from II to III. Piper stepped up to the Archer III by incorporating a new cowling utilizing NASA inspired, University of Mississippi-developed, axisymmetric engine inlets, a new windshield line, an improved panel, and a revamped interior.

The idea behind the new cowling was to glean an extra knot or two of speed, modernize the airplane’s looks, and increase cooling efficiency. To that end, Piper incorporated round inlets in place of outboard-facing, D-shaped inlets of old. Piper also moved the landing light out of the high-vibration cowling onto the wingtip.

The lowered windshield line was incorporated to allow moving electrical switches (master, mags, alternator, primer, starter, landing/taxi lights, nav lights, and strobes) onto a small, overhead panel on the cabin ceiling. This is the traditional position for electrical controls on corporate airplanes, and Piper concluded there was no reason the Archer shouldn’t benefit from the same professional layout.

Piper also borrowed upgrades from two other company models, the Malibu Mirage and Saratoga HP (the latter now discontinued). In short, the Archer was a comfortable place to spend an hour or a day lofting above the Earth. Interior dimensions are 42 inches across (coincidentally, exactly the same as a Bonanza) by 45 inches tall, adequate for most pilots. Anything that’s not covered in tweeds or leathers is covered in plush pile or rich wool fabric. The Archer III’s panel reflects recent improvements on the Mirage, scaled-down to accommodate the Archer’s smaller instrument housing and reduced complexity.

Payload with a full stack of avionics and a full service of fuel works out to about 575 pounds. That’s three full-sized passengers with a modicum of luggage. The heaviest option is air conditioning (60 pounds), but if you operate an Archer regularly in the Deep South or Southwestern U.S., the extra comfort might be well worth the loss of payload.

None of the PA-28 line was intended for high-altitude operation, as evidenced by the rate of climb (667 fpm) and service ceiling (13,240 feet). This makes climb a fairly leisurely affair to the optimum cruise height of 7000 feet. Back in the early ‘80s, I flew an Archer out of Grand Junction, Colorado, and employed ridge lift off the Rockies to soar across the top of the tallest mountains at 15,500 feet. This was far above the airplane’s unassisted best efforts, and as soon as I reached Colorado Springs on the east side of the hills, the airplane involuntarily descended to about 11,500 feet.

Level at a more reasonable 6500 feet with the left knob against the panel, you’ll see true airspeed wind around to about 125 knots. Piper lists max cruise at 128 knots on just over 9.0 gph, and while that’s probably attainable on a totally stripped machine devoid of antennas, few production machines with a typical stack of radios and accompanying antennas will come close to that ideal. Throttle back to 65 percent cruise and the Archer will lose about five knots. Fifty-five percent settings don’t make much sense, as the loss of airspeed is disproportionate to the minor amount of fuel saved. In other words, you’ll score equal or better mpg at 65 percent power.

A speed of 120-125 knots isn’t exactly burning up the sky, but at least you’re flying in a cabin well-insulated against the noise and vibration so common in other airplanes. The Archer is one of the quietest fixed-gear singles I’ve flown, with noise levels in the 80 db range. The airframe isolates the cabin from much of the vibration, so it’s a friendly place to fly in that regard, as well. For better or worse, I’ve flown a wide variety of singles and twins across many of the world’s oceans, and I can personally attest that cockpit noise level can be a major concern when the legs are long and weather isn’t clement.

Flying above Florida’s Indian River with a Piper demo pilot in the right seat, I couldn’t resist trying to get the airplane mad at me. Stalls are a total non-event in the 181, a fact I reconfirmed in the test airplane. Frustrated to 60 degrees of bank, the Archer steadfastly refused to bite.

Despite, or perhaps because of its other talents, the Archer shines brightest in the pattern. Pilots who artificially judge their overall competence by greaser landings are bound to love the Archer. It’s certainly one of the easiest airplanes around for returning from sky to Earth. The flare is almost totally predictable and the payoff so gentle, it’s easy to hold the airplane a few inches or a few feet above the runway and squeak onto the asphalt in classic, nose-high attitude. With flaps fully extended, the 181 hangs in there to 52 knots, so you can easily fly approaches at speeds of 65 knots or less and not feel as if you’re pushing the envelope.

Runway requirements are less than 1500 feet for both takeoff and landing, and that’s at gross. If you operate with only two people up front most of the time, the way many owners of four-place airplanes fly, you may do even better. The point is, you can fly an Archer into and back out of any paved runway with clear approaches and at least 1550 horizontal feet, assuming the runway isn’t located in the high Sierras or Rockies.

In truth, the Archer is about as close as any manufacturer has come to an everyman’s single. Though the old Warrior (now discontinued) was less expensive with almost the same cruise performance, the Archer has the extra punch to carry four people into places where a Warrior or Skyhawk would be marginal at best. Combine that talent with the easiest landing and gentlest handling characteristics in the class and you begin to understand why the Archer continues to survive as one of Piper’s evergreens.