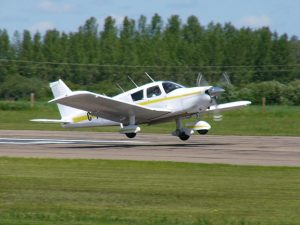 At AOPA’s request the FAA has delayed from February 7 until March 9 the effective date for an airworthiness directive (AD) that would have required inspections of 17,957 Piper PA–28 series single-engine aircraft to verify that the left and right fuel tank selector cover placards are positioned properly, and replacement of those found not to conform.

AOPA is hopeful the 30-day interval will also give the FAA time to consider comments submitted on the AD due by a March 9 deadline. Although the AD solicited comments, it was originally to take effect February 7 without the customary public-notice period, which the FAA described as “impractical,” citing a “risk to the flying public.”

Urging that a new AD be issued after the public is heard and comments considered, AOPA submitted formal comments to the docket, acknowledging the safety risk of improper fuel selection and management but noting that the association was “unaware of any accidents or incidents that have occurred as a result of improper placards. Many

of the affected fleet have been in operation for decades and the owner/operator has likely verified the accuracy of the fuel selector and corresponding tank through fuel gauge readings over hundreds, if not thousands of hours.”

With no placard-related accidents known and only one report of fuel placards reversed, AOPA questioned the urgency of the FAA proceeding to the AD final rule without issuing a notice of proposed rulemaking that afforded the public the requested opportunity to comment before action is taken.

AOPA also contended that PA–28 owners and operators “are capable and should be allowed to perform the initial inspection,” adding that the FAA “has a long history of allowing such actions.”

The FAA estimated the cost of compliance with the original AD at $42.50 for each inspection, resulting in a total estimated cost of more than $763,000 for the fleet of 17,957 airplanes – money that could be saved if aircraft owners were permitted to perform the initial inspection.