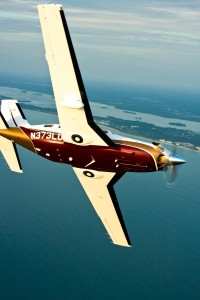 Piper’s Sole Turboprop Gets Down to Business

Designers have dreamed of fielding single-engine turboprops for years. On the surface, propjets seem to offer the best of everything—if at a price. Teaming the reliability of a jet engine with the thrust of a prop is, in many respects, an aeronautical engineer’s dream. It’s not surprising that practically every company in the industry has tried the configuration at one time or another.

Nonetheless, few have succeeded, including many of general aviation’s heaviest hitters. At one time, Beechcraft had big designs on a turbine-powered, pressurized Bonanza called the Lightning. The company eventually abandoned that project after pouring uncounted millions into its development.

Cessna experimented with a PT6-powered P-Centurion in the ‘80s, as well, but the company folded that project when it shut down all small aircraft production in 1986. Attorney F. Lee Bailey tried to develop an Allison-powered version of the Aero Commander 200 but failed. Mooney was even discreetly flying an Allison-powered 201. Sadly, none of them even came close to being certified.

In fact, the first production turbine corporate single was to come from a surprising source. SOCATA of Tarbes, France, began marketing the TBM-700 in 1990 at $1.2 million, flying behind a 700-shaft horsepower (shp) Pratt & Whitney PT6. (Okay, the VERY first certified turbine single was the Cessna Caravan utiliplane, but many didn’t regard it as a corporate airplane in those days.)

The SOCATA entry offered copious room for six, strong climb, and cruise speeds just below the magic 300 knots. The new airplane sold almost 100 units the first year, then trickled down to 15 units or less per year. By the beginning of 2008, however, SOCATA had sold some 430 of its TBM-700 and upgraded TBM-850 propjets.

Pilatus joined the fray in 1995 with its King Kong PC-12. Blessed with a monster 1200-hp P&W engine out front and nearly 1800 pounds of payload behind its huge 11-seat cabin, the PC-12 was and remains the undisputed top of the class in weight, size, and price—if not performance. In freighter configuration, the oversized cargo door opens up the aft left side of the fuselage and even allows loading with a fork lift. Despite a current entry-level tab of just under $4 million, the Swiss company has delivered just under 900 of the super-size singles, proving, if nothing else, that price alone may not be much of a deterrent for the right airplane.

The comparative success of the foreign companies hasn’t gone unnoticed by the aircraft modifiers. A number of them recognized that there was big money in the sale of turbine singles and began investigating turbine conversions of existing piston super-singles. Turboprops and jets must fly higher to realize their maximum performance potential, so the most logical candidates for conversion were models already designed for comfortable travel in the flight levels. The industry’s two piston-powered inflatable singles were among the first targets of major conversion efforts.

Turboprop engines can make sense for unpressurized models as well—provided the pilot and passengers are willing to use oxygen on just about every flight or to put up with high fuel burn and short range below 12,500 feet. Accordingly, there are a lesser number of Tradewind A36 Bonanzas as well as Turbine Air B36TCs, Turbine Maules, Soloy 206s, and a variety of other turboprop conversions flying today. Most of the conversions concentrate on the basic task of replacing the piston engine with a turboprop, usually with as few other modifications to the airframe as possible.

Conversions, however, will never quite scratch the itch for some aviators. Just as there are pilots who wouldn’t consider buying anything but a new airplane, there is another contingent of aviators who wouldn’t even look at a conversion. Never mind that the engineering may be the same or better. For some aircraft buyers, nothing but a new production airplane will do.

In 2001, Piper finally introduced its new production alternative to the Rocket Engineering Jetprop DLX. Like the converted Malibu/Mirage, the Meridian premiered with a P&W engine, in this case a PT6A-42A rated for 500 shp, a similar powerplant to that used in pairs on Piper’s earlier Cheyenne I corporate twin. TBO is 3600 hours with a recommended hot section inspection at half that.

Predictably, the Meridian was heavily based on the Mirage airframe, utilizing Jim Griswold’s original wing, the same cabin and fuselage (aft of the firewall), and the same tail. With the obvious exception of system changes and enhancements (plus instrument upgrades associated with the turbine engine and an even more talented avionics suite), the Meridian is essentially the Mirage from the firewall aft.

Standard fuel was increased from 120 to 170 gallons to accommodate the turboprop’s higher fuel burn by wetting virtually the entire wing, but other than that, the Meridian fuselage and wing were practically identical to those on the Mirage.

As with any new product, the first Meridians had some growing pains, but the prognosis has become progressively more positive as the airplane has come of age. Don Catalano, president of Corporate Realty Consultants in Commack, New York, purchased his Meridian several years ago, and he immediately became a strong cheerleader for the airplane.

Catalano’s consulting firm specializes in helping companies find the best possible location for expansion or relocation. The real estate executive purchased his Meridian after a careful evaluation of his company’s mission requirements and also because he felt it was the best investment he could make between the three turboprop singles available. A 1300-hour pilot at the time, Catalano felt the performance improvements of the other airplanes didn’t justify their higher prices unless an operator had a specific need for their talents.

Like so many other businessmen with a need for fast corporate travel, Catalano is watching the light jet market carefully to see which models will become real and which will fall by the wayside.

Catalano owned a Mooney Ovation before stepping up to the Meridian. Despite the Mooney’s efficiency and obvious talents in the bottom three miles of sky, the Meridian was a huge improvement in corporate utility and a far more effective on-demand business tool. Catalano said the Mooney often put him right in the middle of the weather—thermal turbulence in summer and airframe icing conditions in winter.

With the turboprop Meridian, he graduated to cruising on top in clear air and sunshine most of the time, and sometimes with the benefit of spectacular tailwinds boosting groundspeed to well over 300 knots.

“More importantly,” emphasizes Catalano, “the Meridian was an investment in reliability. I never had a minute’s trouble with the Ovation, but reliability with a PT-6 is obviously a whole order of magnitude better than with any piston product.”

Turboprop flexibility and performance were other big selling points. “Once, a few years back, I made a trip to Chicago for a convention,” says Catalano, “and there were spring thunderstorms all along the route, some as high as 26,000 feet. With the Mooney, I would have had no chance of climbing above them, but the Meridian made all the difference. I was able to top everything easily at FL280. It’s true you can’t always plan to out climb the weather unless you’re flying the Concorde, but probably 90 percent of the time, you’re cruising on top.”

Catalano regularly traverses 20 eastern states in his search for the perfect development locations. “In a recent week, the Meridian allowed me and two of my staff to fully research and visit properties in Baltimore, Hagerstown, Atlanta, and Jacksonville, all within a few days. In another instance, we traveled to seven cities in five days, covering 3100 nm in the process. The same trip might have been possible on the airlines, but it would have taken much longer and not been nearly as comfortable.”

Meridians after 2003 benefited from a higher gross weight, boosting full fuel payload to over 700 pounds. Flown up high where turboprops do their best work, the Meridian’s fuel burn drops to about 30 gph. If you left 50 gallons in the truck and flight planned for the high ‘20s flight levels, you could carry six average-sized folks over 700 nm stage lengths with reasonable reserve.

Catalano doesn’t have occasion to fill the seats that often so payload isn’t often much of a concern. With only two or three folks aboard, he can still fill the tanks and plan to linger aloft for an easy 3.5 hours at high altitude, long enough to span nearly 900 nm.

The executive’s more typical stage lengths run about 600 nm, and he flies the airplane usually four to five hours a week, though not always strictly for business. In the spirit of giving back, Catalano participates in charity operations for Angel Flight, ferrying patients and their relatives along the East Coast to hospitals and doctor’s offices.

Like all the early Meridians, Catalano’s airplane features the Meggitt Magic avionics system, an unusually talented combination of radios, instruments, and autopilots that allows a general aviation pilot to play airline captain in his own turbine aircraft. In fact, even the early Meridians were more talented than some of the early airliners. Today’s newer Meridians feature glass panels, but the dual 530s and other displays installed on the early PA46-500s made the airplane resemble truly heavy iron, with nine small screens displaying all parameters of engine and system condition plus all navigation information.

I flew Catalano’s Meridian out of Philadelphia for air-to-air photos along the Hudson River flyway over New York, and the airplane was as easy to handle as a Mirage, while offering all the obvious advantages of a turboprop; extra power and performance, superior reliability, improved operating simplicity, and virtually the same handling characteristics in the pattern as its piston counterpart. In fact, while Piper lists the same takeoff and landing distance for the Mirage and Meridian, availability of reverse thrust for braking very well may provide the Meridian with an advantage in landing mode.

Like other successful businessmen who need fast, efficient corporate transportation, Catalano is eyeing a small jet, but for the nonce, his Piper Meridian suits his needs very well.