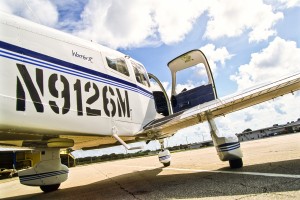 Though now out of production, the Piper Warrior was a capable competitor to Cessna’s Skyhawk.

Park a Warrior next to a Skyhawk, and the primary differences would be all too apparent. Most obviously, the Warrior mounts its wing below the fuselage, whereas the Skyhawk flies beneath a high wing. The Cessna allows admission through two doors, while the Warrior makes do with one on the copilot’s side.

Both airplanes feature semi-comfortable cabins, provided the occupants aren’t too wide of hip or shoulder. Visibility is adequate out of both designs, and other miscellaneous creature comforts are comparable—depending, of course, on the size of your creatures.

Argue all you want about the relative advantages of high wings (simpler fuel system with no need for an electric fuel pump, easier preflight, better view of airspace below, shade from sun, etc.) vs low wings (better view of traffic in the pattern, easier refueling, simpler tie-down, arguably better esthetics, etc.), the Archer/Warrior was born with a natural disadvantage: It came late to the party.

The first Skyhawk was introduced in 1956, when the best Piper could offer was the Tri-Pacer, a creditable airplane, but hardly a trainer. Piper’s Cherokee 150/160, predecessor to the Warrior, premiered in 1962, and the first actual Warrior didn’t appear until 1974.

Like the Skyhawk, the Warrior started life with less horsepower and progressed to 160 hp. Cessna started with 145 hp then transitioned to the same 160 hp and even 180 hp on the later 172S models.

Both Piper and Cessna hoped their minimal four-seaters would gain stature as institutional trainers, machines that could carry a student and instructor up front and another student monitoring the lesson from the rear. Then, the students would trade places and the second student would have his chance to try the lesson. The idea worked well at some schools such as Embry Riddle, the University of North Dakota, and other organizations with large flight training departments, especially ab initio schools that enrolled large numbers of foreign students. Sadly, there weren’t nearly enough of these schools to perpetuate the models. Private sales weren’t an option—they were mandatory!

These days, the Warrior is no longer in production and Cessna has streamlined the Skyhawks to eliminate the 160 hp model. From 1977 to 2012, however, the Warrior challenged the 160 hp Skyhawk head-on (excluding Cessna’s piston shutdown between 1986 and 1997).

Irrespective of the institutional training market, Piper and Cessna were fighting the battle of the trainers, the duel for the step-up market that presupposes a student pilot is most likely to buy the same type of airplane he learned in. Since the Tomahawk and 152 are long gone, the Warrior and Skyhawk became Piper and Cessna’s respective entry-level airplanes.

After the demise of the 152, Cessna tried to fill in the blank with the model 162 Skycatcher, producing the airplane in China, then disassembling it and shipping it to Wichita before reassembling and certifying it in the U.S. For its part, Piper attempted to fill the gap with the Piper Sport, another foreign LSA. Eventually, both companies decided the LSA business was not for them and threw in their respective towels. The Piper Sport was discontinued three years ago (it’s still being produced overseas and exported to the U.S) and the Skycatcher was dropped at the close of last year, partially because of its high price ($149,000) and relatively few buyers. At this juncture, the prospect of continuing production of the 162 in China for the world market is uncertain.

Today, the bottom of the product line is represented by the Archer and the Skyhawk, both 180 hp airplanes. If there’s any good news, it is that there are a plethora of near-new Warriors (as recent as 2012) out there and they are competent little trainers/transports capable of filling most needs from flight instruction to 2 + 2 family transport. The Skyhawk shows every sign of continuing production well into the 22nd century, but the Warrior very well may wind up as one of the better used plane buys.

Born of the Cherokee 140 in 1977, the original Warrior sported 150 hp and a stepped, semi-tapered airfoil design that looked sexier than the original, Piper Hershey-bar wing, but didn’t really deliver much aerodynamic benefit. Piper claimed slightly improved roll response and better performance, but most pilots couldn’t tell the difference. Perhaps it was enough that the Warrior simply looked better. By 1977, Piper decided to upgrade to the 160 hp engine, and that was the last substantive airframe change until the close of production in 2012.

These days, you can buy one of the early Warriors for as little as $25,000. The 1977-up variety are available for prices starting at $30,000 and ranging up into the $200,000 bracket—if you feel a need for a glass panel and all the goodies that come with Piper’s more modern iteration of trainer.

With their spiffy wheel pants, tapered low wing, and swept appearance, the Warrior design did upgrade the look of the standard PA-28-150, but Cessna had a major lead that Piper was never able to close.

The Warrior’s O-320 Lycoming engine has gained a reputation for bulletproof operation and an attainable 2000 hour TBO. In fact, many operators report actual TBOs well beyond the commercial limit. Aircraft used for Part 91 operation may fly well past the recommended TBO, as long as all components remain airworthy.

The late Lyle Shelton, owner of the racing WWII U.S. Navy F8F Bearcat, “Rare Bear,” also owned a Warrior that he and his crew used to shag parts and run other errands for the race plane.

Lyle had only two rules for anyone using the little Piper: 1. Power full forward at all times for takeoff and cruise, and full back for landing and; 2. Change the oil at least every 25 hours.

Lyle ran that Warrior’s engine to 2800 hours before finally deciding to overhaul it. When his pit crew of experienced TWA mechanics opened up the engine, they all said it looked near new inside, with very little wear. Crew chief Cliff Putman commented the engine was in such good condition, it looked as if it could run another 700-800 hours without problems.

With only 160 hp to push 2300-2400 pounds through the sky, the Warrior isn’t super-enthusiastic about climb or cruise, but Piper reasoned, correctly, that the airplane would probably be operated in two- seat mode most of the time—meaning it would usually be well under gross. On that basis, you should regularly see the book climb rate of 644 fpm or better.

One thing to keep in mind, however; the Warrior is not a good high flyer. Service ceiling is an unimpressive 11,000 feet, so if you fly in the Southwestern U.S. where the rocks grow tall, you might be better off in the Skyhawk where service ceiling with the same power is a more reasonable 13,000 feet.

Since both airplanes use the identical engine, the difference may be in the Skyhawk’s larger, greater span, more efficient airfoil. The ‘Hawk sports 174 square feet of wing to the Warrior’s 170 square feet, and the aspect ratio is 7.5 for the Skyhawk, 7.2 on the Warrior. Higher aspect ratios generally convey better climb performance and a higher service ceiling.

Speed was never a major goal for the Warrior, as it had little to do with the airplane’s mission. Like the Skyhawk, the Warrior was intended as more of a trainer or family machine, designed specifically to provide simple, honest transportation at a price that wouldn’t bust the family budget.

The Warrior manages about 115 knots at 6500-7500 feet on 75 percent power. With 48 gallons aboard and a burn of about 9.5 gph, you have roughly four hours plus reserve at max cruise, five hours at long range power. That’s enough for nearly 450 nm range at the higher setting, closer to 500 nm at reduced power.

If cruise and climb numbers don’t favor the Warrior, the Piper fares better in the pattern, especially in landing mode. Dirty stall is down around 44 knots, so you can plan approaches as slow as 55 knots without that verge-of-destruction feeling. Better still; the stall itself is almost silly simple with plenty of gentle warning. It’s easy to gauge the moment of touchdown. Dump the flaps if you’re flying one of the older Warriors with a manual Johnson bar lever, and the

Warrior will stay on the ground with little tendency to bounce or do anything you don’t expect.

It might be an exaggeration to say you can’t make a bad landing in the type, but the airplane refuses to bite unless you really abuse it. Even then, a Warrior forgives a multitude of sins and tries to make its pilot look good.

There was a time when aviation journalists predicted there would always be a Warrior in Piper’s stable. Not so. Market forces dictated otherwise. Piper decided its entry-level airplane should be the Archer, so they’re now producing an economy, trainer version and a deluxe model of the PA-28-181.

Like nearly everything in aviation, that airplane too will have its day and pass into aviation history, but for the nonce, you can still buy a Warrior only one year out of date that will do practically the same mission for a lot less money.