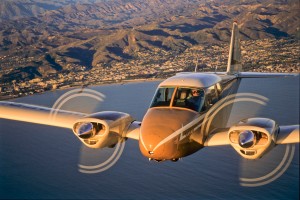 I was sitting across from Chief Wendell Chino, chief of America’s Chiracahua Apache Indian tribe, in his Piper Cheyenne III at the Ruidoso, New Mexico airport when he commented that he was an avid pilot in addition to all his tribal qualifications. At the time, we were discussing his use of the big Cheyenne in conjunction with his second job as Chief of Chiefs, the primary spokesman for all American Indian nations in Washington, D.C.

“Yes, I learned to fly 20 years ago in a Cherokee and got my twin rating in a raggedy old Piper Apache that had seen better days,” he smiled. “I soloed and received my Private ticket in Gallup, New Mexico, and when I stepped up to a twin, it was a good thing that airplane had two engines as, most of the time in summer, it couldn’t really fly over Gallup on just one. The old Apache flew fine with both engines running true, but you didn’t dare feather one for real unless you were at 10,000 feet or above, as you’d just set up a drift-down and have to restart the engine in a few seconds.”

At the time, Chino had a professional pilot to fly his Cheyenne – “These days, I just ride in back,” he told me – but he remembered the times when he attended to tribal business with the help of an airplane. “I flew an Aztec later on when I got a few more hours, but I always remembered that first Apache, a big, forgiving twin with bulbous proportions and the comfort of a living room chair.”

Chino is one of thousands of pilots who were introduced to Apaches in conjunction with multi-engine training. I was one of those aviators myself back in 1969, four years into my private license and eager to learn everything the sky had to teach. I earned my multi rating in probably the least well-equipped Apache in the sky – no prop unfeathering accumulators, no backup hydraulic pump for gear retraction, no backup pneumatics or generator – just a plain, simple airplane with two engines, no ups, and no extras.

Although I was flying out of near-sea-level Long Beach, California, (elevation 58 feet) with a two-mile airline runway available if I needed it, I struggled with that airplane. Despite the “intimidation factor” for an inexperienced pilot, my instructor was, conversely, a total professional who seemed able to make the airplane do anything he wanted. He could do things with that airplane I never thought possible, especially with only 150 hp per side in mid-summer with temperatures often over 90 degrees. That particular airplane broke down a lot, the systems were old and tired, and spare parts weren’t always readily available. As a result, my twin training was extended over a period of two months rather than the two weeks I was expecting.

The first Apaches premiered in 1954 when Eisenhower was president. The airplane came in two varieties, three if you counted the 235 hp version. (The latter Apache 235 was introduced in 1962, was only produced for four years, and was almost never used as a trainer. It was later phased out to make way for the Piper Aztec.) The primary models were the 150 with an O-320 Lycoming of that power on each side, or the 160 with an extra 10 hp on each wing, achieved by merely turning the engine 100 rpm quicker. (Someone told me there had been a limited number of Apache 135s built, but it’s hard to imagine how poor single-engine performance would have been with only 135 hp per side.)

Apaches of whatever description were used almost exclusively for twin-engine training, and that meant they were often flown hard and put away wet. “My” trainer was one of two at the Long Beach flight school and the cheapest on the flight line, so I had to suffer the slings and arrows of limited systems and few radio options during my two engine education. At the time, I didn’t know any better, so I assumed all Apaches were the same and that everyone had to put up with gear that wouldn’t retract if the wrong engine failed and propellers that would go into feather at the wrong times when you shut them down.

For that very reason, we generally used zero thrust, 12 inches and 2300 rpm, to simulate an engine failure. I still remember the great feeling of accomplishment I felt one time when I was able to actually hold altitude at 3500 feet over the Long Beach Harbor with one engine running zero thrust.

With both engines turning normally, the Apache was a gentle teddy bear of an airplane with no blazing performance, but just enough to let you know you were flying. My trainer could score 1000 fpm on two engines on alternate Thursdays when the moon was full and all my biorhythms were on a high. The rental rate wasn’t obscene, but the Apache rarely left the Long Beach area. No one could afford the rental for a cross country trip.

In-flight manners were typical Piper – benign, gentle and totally forgiving – prophetic of the upcoming Cherokees. When the Apache was introduced, Piper’s resident trainer was the Colt, a reduced power Tri-Pacer, and the Apache was indeed a super-bird in contrast to the Colt.

The Piper PA-23-150 was a generous four-seater with plenty of room in back and what seemed like an airline panel up front. Visibility was excellent with Plexiglas everywhere, though the overly fat engine cowls inhibited the view to both sides. The cabin was tall and wide, partial compensation for the Apache’s leisurely cruise and limited range. Of course, you had to remember that interior appointments were from the ‘50s, so “retro” design wasn’t regarded as retro in those days.

Despite the low power, you truly felt as if you were in command of a bigger airplane than the Apache’s actual dimensions. The power console with its long throttle, prop, and mixture controls smacked of something more serious, more professional than a Piper trainer—at least, that’s what we students thought in those days.

We nearly always flew the airplane with half fuel and just an instructor and a student to keep weight down and pretend we actually had some single-engine performance. Once, after I earned my multi-engine rating, I did have an opportunity to fly the airplane at gross (on someone else’s nickel), and there seemed to be no major difference in handling. Of course, we didn’t shut down any engines and never climbed over 7500 feet, so the Apache was hardly challenged.

Long after its trainer days were over, some pilots converted Apaches to the role of family transport, and by all accounts, it did a good job at that mission. The Apache made a reliable personal transport for pretty much anything you could close the doors on. At max cruise, the Apache consumed 18 gph. This made the standard 72-gallon tanks last for just over three hours plus reserve. Pull back to economy settings and you could stretch that to 4.5 hours. Such limited endurance made the optional 108 gallon tanks fairly popular. Apache pilots with good kidneys and 108 gallons aboard could remain aloft for up to seven hours. Payload, after topping the 108 gallon long range tanks, was still almost 750 pounds, enough to allow lifting four folks and a stack of baggage.

Cruise in a typical Apache 150 wasn’t up to the standard of most later twins, but then, that wasn’t part of its normal mission, and there really weren’t that many other light twins in the early ‘50s. Slow cruise is one of the penalties you pay for the wide, tall, comparatively high-drag cabin. Plan on 145 knots at max cruise and 6000 feet; 140 knots at 65 percent at 9000 feet. In truth, Apaches weren’t terribly happy at high altitude. Instead, they were content doing their work in the bottom mile of sky. And they did their work fairly well, despite the marginal single-engine performance and niggling systems limitations mentioned above. Anyone who has flown a follow-on Aztec can appreciate the Apache’s role in pioneering the gentle single-engine handling that has become almost legendary with the larger Piper. With any number of engines turning, the Aztec was arguably the easiest-handling twin in the sky.

Similarly, Apaches return to Earth with aplomb. Full flap deployment is an unusual 50 degrees, at least 10 degrees more than most other twins, reducing stall to a low 51 knots. Approaches at 70 knots therefore tempt neither fate nor the 63 knot Vmc. Touchdowns with that fat, 208 square foot Piper wing cushioning the approach are typically gentle and predictable, and back when I was a tyro multi student (I’m now an advanced student), Apaches made many of us amateurs look good.

Inevitably, I marched on and left the Apache behind. I was fortunate to fly a plethora of twins (and even two tri-motors) over the subsequent 40-something years, though I’ve never really managed to rise above the level of amateur.

Despite my flaws and those of the Apache, the Piper PA-23-150/160 will always have a place in my memory as one of the most distinctive airplanes I’ve flown.

All specs and performance numbers are drawn from official sources, often the aircraft flight manual or the manufacturer’s web site. Alternate source on used airplanes is Jane’s All-The-World’s Aircraft.