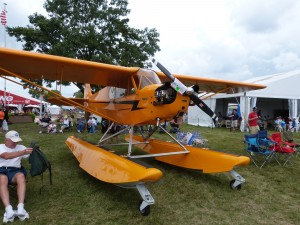 Floyd Threet was one of the more senior members of the Civil Air Patrol (CAP) squadron on Merrill Field in Anchorage, Alaska, when I signed up as a Cadet in 1953. Threet owned perhaps the rattiest airplane on the airport—a truly beat-up old J3 Cub that had been converted to an 85-hp engine, questionably qualifying it as a Super Cub.

The airplane had the name “Slow Poke” painted below the left pilot’s window, and the name was totally appropriate. The Cub was easily the slowest airplane in the squadron, replete with several areas of poorly patched fabric to keep things nice and windy inside, a heater that didn’t know the difference between on and off, and a noise level barely below that of a AA fuel dragster.

As one of the newer cadets in the squadron, I was low kid on the totem pole for airplane selection—and in Alaska, there really were totem poles! The rough terrain and lack of roads make Alaska one of the world’s most air-minded locations, and perhaps accordingly, the Anchorage CAP squadron was one of the largest. Even at a time when avgas was only $.35/gallon, the CAP’s free fuel was an inviting incentive to aircraft owners.

Our senior members owned a wide variety of airplanes, probably a dozen different models, everything from a Cessna 180 and Navion to a Maule and a Stinson. In contrast to the little Cub, these were all luxury flying machines, and most of them even had heaters that worked! The Cub’s didn’t, at least not so you’d notice.

To a young boy enamored with aviation, the situation was obvious. I was the quintessential airport kid, and I latched on to Floyd Threet immediately. I formed a friendship with him that secured his Cub’s back seat on probably 50 flights during the three years I lived in Anchorage. I may not have been warm and comfortable in the J-3’s canvas rear seat, but at least I was flying when most of the other cadets were vying for rides in the bigger, four-seat airplanes.

Threet generously allowed me a modicum of stick time during my rides. Of course, none of my flying time was legal—I was underage and Threet wasn’t an instructor. So what! I was in the sky, and that was all that mattered. We flew dozens of search and rescue missions – all search and no rescue – but it was my opportunity to be off the ground. What could be better?

In exchange for helping Threet with occasional maintenance and often semi-daily trips to the airport to keep the weight of snow off the wings, plus washing his airplane in winter (try section washing an airplane in winter at 20 degrees F – loads of fun), the owner gave me informal and often inaccurate instruction on the basics of flight—simple stick and rudder training that was to serve me well, sort of, in later years when I was making enough money to finally afford legitimate flight training.

Even better, I’d accidentally hooked up with the only airplane in the squadron that had a choice between wheels, skis, or floats. The 180 and Maule had three-way capability, but neither owner had a set of floats or skis. Threet owned a beat-up set of aircraft skis and a dubiously water-tight but still serviceable pair of seaplane floats for the little Cub. In summer, he would sometimes replace the wheels with floats and base the Cub at nearby Lake Spenard—then and now the world’s largest seaplane base.

I doubt if he had a seaplane license, but no one cared much in those days. Alaska was a territory at the time, and pilots were free to do their own thing as long as they didn’t get in the way of a military fighter or airliner, hurt anyone, and no one complained. I received a small amount of water training from Threet, however informal or quasi-legal. We also made several flights on skis, often landing for the heck of it pretty much wherever we wanted just to watch the plume of light powder snow rooster tail off the skis. It was a great introduction to a primitive form of bush aviation.

My family moved away from Alaska when I was 16, but I was able to move back north a year later to attend the University of Alaska in Fairbanks. Unfortunately, Threet had left the territory, and my free ride was over.

I eventually moved to New Mexico and on to California and earned my pilot’s license in boring, nosewheel airplanes, but I never forgot those 35 or so unlogged hours in the little Cub in Anchorage.

It’s hard to forget a Cub. The airplane is about as iconic as any in general aviation. Many non-pilots regard anything that’s not a jet fighter or an airliner as a Piper Cub. In fact, J-3 Cubs aren’t as common as you might think after five decades of attrition.

The “real” 65-hp Piper J-3 Cub was only built from 1938 to 1947, but variations on the theme, the Super Cruiser and Clipper, were offered with engines ranging from 65 to 115 hp through 1949. (The 1949 Piper Clipper lasted for only one year. Pan Am claimed to have proprietary rights to the name and threatened to sue if Piper didn’t change the model name).

The J-3 was easy to recognize as it used a flat-four engine with all four cylinders exposed to the relative wind for cooling. Later models included a cowling that fully enclosed the engine.

The initial J-3 was an indirect development of the 40-hp J-2, originally designed by C.G. Taylor (of Taylorcraft fame) and refined by Walter Jamouneau. Piper sold some 19,000 J-3 Cubs (the “J” in the model name), not counting military variations. In aviation circles, the Piper Super Cub was perhaps better known, built by its namesake company through the early 1990s and produced today by CubCrafters of Yakima, Washington.

The “Super” part of the Cub is related to its big power and huge wing. The modern airplane flies behind a 150-hp Lycoming engine that transforms the old J-3 Cub’s performance from benign to spectacular.

Cubs have such excellent low-speed performance with their copious power that pilots feel almost immune to the laws of aerodynamics. In fact, Super Cubs are still respected as among the best bush airplanes available, and literally hundreds of them are employed throughout Alaska and Canada to land where other airplanes would fear to roll a tread. The airplanes’ ability to lift off in as little as 200 feet and land in the same distance means it’s an ideal machine for operation into places where there are no airports.

The short field talents of the original Cub were primarily related to the type’s super low stall speed of 33 knots and a large, Clark Y airfoil. This made the airplane ideal for a number of military applications. According to Bill Piper Jr., “All we had to do was paint the Cub olive drab to produce a military airplane.” Piper L-4s flew every job from forward air control, reconnaissance, supply, medical evacuation to, in one case, a fighter.

(OK, that’s a stretch, but a military L-4 version of the Cub was involved in the last dogfight of WWII. Two American AAF pilots took on a German Fieseler Storch with their Colt .45 ACP handguns and eventually forced the German pilots to land and surrender to ground forces.)

Cubs found favor with pilots as basic trainers and fun traveling machines once students were licensed. A typical 1946 model J-3 sold new for $2195, not totally beyond the province of a prospective post-war aviator. Today, the same airplane in good condition goes for more like $21,000.

Some wag once commented that “The J-3 is a very safe airplane. It can just barely kill you,” and that’s certainly an ultimate truth. Indeed, everything in a J-3 happens at low speed—taxi, takeoff, climb, cruise, and landing. On the ground, the airplane sits at an exaggerated nose up attitude such that there’s no visibility directly over the nose. Taxiing a J-3 is a challenge, as the procedure is to S turn left and right to reveal what you’re about to hit at center. Fortunately, the airplane’s rudders are very responsive on the ground. Its brakes aren’t. They’re heel brakes, variously described as “marginal” or “totally worthless.”

Push the power forward for takeoff and very little happens. There’s hardly any noticeable response from the Continental engine, but that’s not a problem when you can lift off at only 35 kts. The tail comes up almost immediately with the application of power and forward stick, and there’s minimum torque to contend with.

Once in the air, the Cub climbs better than you might expect with only 65 hp out front—often 500 fpm or more when flying solo. A passenger can reduce that to 350 fpm. The climb speed is so slow that any climb at all seems like more than it is.

With a service ceiling of only 11,500 feet, the Cub was never intended for cruise much above 4000/5000 feet. At that height, you can expect to see 65 kts cruise when flying light. Standard fuel capacity was only nine gallons, but typical 75 percent power settings work out to only about three gallons per hour, so the airplane can remain aloft for two hours plus reserve. In short, the Cub defines “low and slow.”

In a similar sense, the Cub maneuvers in a gentlemanly manner. All turns demand proper rudder coordination to counter adverse yaw, and the roll rate is actually better than you might imagine. Stalls are similarly simple with little tendency to drop a wing and rotate into a spin—unless that’s what you’re planning. The Cub has a deserved reputation for being an honest airplane. It will do exactly what you ask it to do – no more, no less – but as the pilot above suggests, mistreat it and “it will just barely kill you.”

At the opposite end of the flight, Cub approach speeds can be as slow as 40 kts if you’re dropping the airplane into a short strip or over an obstacle. Throw in a slight headwind, and you’ll be amazed at the short stopping distance. The J3 design literally screams adverse yaw, and the result is an airplane that slips better than anything else you’ve flown. There’s almost no such thing as being too high in a Cub, as full left stick and right rudder (or the opposite) will bring the airplane screaming downhill faster than you’d believe possible.

The landing itself isn’t nearly as challenging as you may have been led to believe, especially in light or no wind conditions. There are no flaps to worry about, so the process is fairly simple—pure stick and rudder. Throw in a little crosswind, and things can get complicated, but the Cub isn’t a difficult airplane to bring back to earth, despite what you may have heard. Just remember that the heel brakes are virtually useless, so try to avoid situations where you may need to use them.

It’s now been nearly three-quarters of a century since the first Piper Cubs flew away from the factory in Lock Haven, Pennsylvania, yet the same basic type is still in production, if no longer under the Piper banner. The Cub joins the Waco as the oldest airplanes still in production. Despite its age, C.G. Taylor and Walter Jamouneau’s remarkable two-seater remains one of the best trainers ever offered.